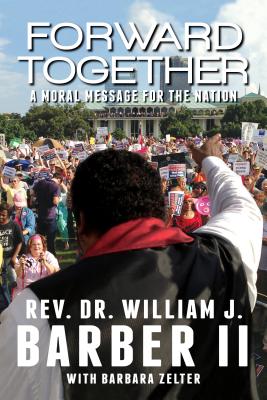 A Moral Message for the Nation

North Carolina's Moral Monday protests have drawn tens of thousands of protestors in what has been called the new Civil Rights Movement. Forward Together: A Moral Message for the Nation shares the theological foundation for the Moral Monday movement, serving as a proclamation of a new American movement seeking equal treatment and opportunity for all regardless of economic status, sexual preference, belief, race, geography, and any other discriminatory bases. The book will also serve as a model for other movements across the country and around the world using North Carolina as a case study, providing useful, practical tips about grassroots organizing and transformative leadership.

William J. Barber II (Author) Rev. Dr. William J. Barber II is pastor of Greenleaf Christian Church (Disciples of Christ) in Goldsboro, NC, the President & Sr. Lecturer of Repairers of the Breach, Co-Chair of the Poor People's Campaign: A National Call For Moral Revival, and a member of the National NAACP Board. Rev. Dr. Barber is also the architect of the Forward Together Moral Movement that gained national acclaim with its Moral Monday protests at the North Carolina General Assembly in 2013. These weekly actions drew tens of thousands of North Carolinians and other moral witnesses to the state legislature. A highly sought after speaker, Rev. Dr. Barber has given keynote addresses at hundreds of national and state conferences, including the 2016 Democratic National Convention. Previously he served as president of the North Carolina NAACP, and currently sits on the National NAACP Board of Directors. A former Mel King Fellow at MIT, he is a Visiting Professor of Public Theology and Activism at Union Theological Seminary and a Senior Fellow at Auburn Seminary. Rev. Dr. Barber is regularly featured in media outlets such as MSNBC, CNN, New York Times, Washington Post, and The Nation Magazine, among others. He is the 2015 recipient of the Puffin Award and the Franklin D. Roosevelt Four Freedoms Award. His father, William J. Barber I, published The Disciples Assemblies of Eastern North Carolina in 1966 with the Christian Board of Publication, Chalice Press' parent corporation.Barbara Zelter (Author) Barbara Zelter has decades of experience as a community organizer and policy activist in North Carolina. A professional editor and member of the North Carolina NAACP, she currently teaches in the Social Work Department of North Carolina State University.
Loading...
or support indie stores by buying on