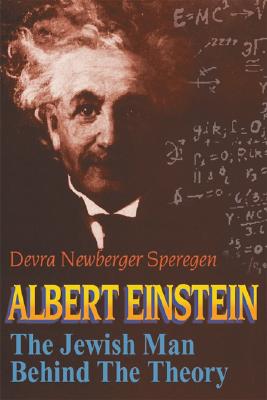 The Jewish Man Behind the Theory

A young adult biography that focuses on Einstein as a great Jewish thinker and champion of Israel. In 2005, the world celebrated Albert Einstein’s annus mirabile, the miraculous year. It was the 100th anniversary of the publication of his five pioneering papers that led to revolutionary changes in our understanding of the properties of space and time. The anniversary of the Einstein’s theory of relativity and the publication of his famous formula, e=mc2, presents JPS with an opportunity to educate a new generation of young readers about Einstein’s importance as a scientist and, more specifically, as a Jew. Speregen fully explores the fascinating story of Albert Einstein’s connection to his Jewish roots and the growth of his commitment to the creation of the State of Israel. She describes Einstein’s difficult early years as a student in Germany’s repressive school system and details his struggle to respond to his stubborn questioning nature and personal search for answers to some of the great questions of the universe. The author discusses how Einstein’s ties to his people grew as he witnessed the rise of anti-Semitism in the early 1900s and his relentless efforts to raise money and public awareness to promote the creation of the State of Israel. (In fact, he was even offered the presidency of Israel after the death of Chaim Weizman.)

Praise For Albert Einstein: The Jewish Man Behind the Theory…

"Among the numerous biographies of Einstein on library shelves, Speregen's book will stand out because of its focus on 'the Jewish man behind the theory.'"—Association of Jewish Libraries Newsletter