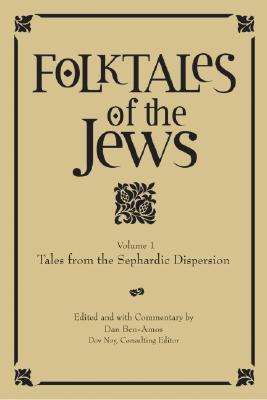 Folktales of the Jews, Volume 1

Tales from the Sephardic Dispersion

Thanks to these generous donors for making the publication of the books in this series possible: Lloyd E. Cotsen; The Maurice Amado Foundation; the National Endowment for the Humanities; and the National Foundation for Jewish Culture.

Tales from the Sephardic Dispersion begins the most important collection of Jewish folktales ever published. It is the first volume in Folktales of the Jews, the five-volume series to be released over the next several years, in the tradition of Louis Ginzberg's classic, Legends of the Jews.

The 71 tales here and the others in this series have been selected from the Israel Folktale Archives (IFA), named in Honor of Dov Noy, at The University of Haifa, a treasure house of Jewish lore that has remained largely unavailable to the entire world until now. Since the creation of the State of Israel, the IFA has collected more than 20,000 tales from newly arrived immigrants, long-lost stories shared by their families from around the world. The tales come from the major ethno-linguistic communities of the Jewish world and are representative of a wide variety of subjects and motifs, especially rich in Jewish content and context. Each of the tales is accompanied by in-depth commentary that explains the tale's cultural, historical, and literary background and its similarity to other tales in the IFA collection, and extensive scholarly notes. There is also an introduction that describes the Sephardic culture and its folk narrative tradition, a world map of the areas covered, illustrations, biographies of the collectors and narrators, tale type and motif indexes, a subject index, and a comprehensive bibliography. Until the establishment of the IFA, we had had only limited access to the wide range of Jewish folk narratives. Even in Israel, the gathering place of the most wide-ranging cross-section of world Jewry, these folktales have remained largely unknown. Many of the communities no longer exist as cohesive societies in their representative lands; the Holocaust, migration, and changes in living styles have made the continuation of these tales impossible. This volume and the others to come will be monuments to a rich but vanishing oral tradition.


Praise For Folktales of the Jews, Volume 1: Tales from the Sephardic Dispersion…

"The Folktales of the Jews is a landmark publication in Jewish and world folklore. In this monumental collection, immediately recognizable as a classic, Dan Ben-Amos has selected, annotated and commented on a broad range of tales drawn from Sephardic tradition. Not since Louis Ginzberg's The Legends of the Jews has such an ambitious and comprehensive collection of Jewish lore been undertaken."—Howard Schwartz, author of Tree of Souls: The Mythology of Judaism

"This is a magnificent book: a major, crucially important contribution to Folklore scholarship, to Jewish Studies, and, of course, to Sephardic studies in particular."—Samuel G. Armistead

"Treasured in memory and shaped anew with each telling, these wonderful stories are now beautifully inscribed on the pages of this splendid book. The journey of each tale along the Sephardic trail is traced with erudition and grace. Truly a treasure of Jewish folk wisdom in its most artful form."—Barbara Kirshenblatt-Gimblett, University Professor and Professor of Performance Studies, New York University