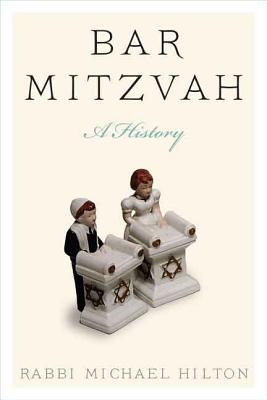 The Jewish coming-of-age ceremony of bar mitzvah was first recorded in thirteenth-century France, where it took the form of a simple statement by the father that he was no longer responsible for his thirteen-year-old son. Today, bar mitzvah for boys and bat mitzvah for girls are more popular than at any time in history and are sometimes accompanied by lavish celebrations.

How did bar mitzvah develop over the centuries from an obscure legal ritual into a core component of Judaism? How did it capture the imagination of even non-Jewish youth? Bar Mitzvah, a History is a comprehensive account of the ceremonies and celebrations for both boys and girls. A cultural anthropology informed by rabbinic knowledge, it explores the origins and development of the most important coming-of-age milestone in Judaism. Rabbi Michael Hilton has sought out every reference to bar mitzvah in the Bible, the Talmud, and numerous other Jewish texts spanning several centuries, extracting a fascinating miscellany of information, stories, and commentary.


Praise For Bar Mitzvah, a History…

"Rabbi Michael Hilton has sought out every reference to bar mitzvah in the Bible, the Talmud, and numerous other Jewish texts spanning several centuries, extracting a fascinating miscellany of information, stories, and commentary."—Jewish Book Council Weekly

"Michael Hilton sets out to answer the question of precisely when, where, and how bar mitzvah became a child-centered ceremony: from a blessing recited by a father freeing him from filial responsibility for the sins of his son, to a ritual in which the son, rather than the father, reached an educational and coming-of-age milestone. . . . Readers interested in the history of Jewish education will find much to appreciate in Hilton's investigation of the sources, and of his weighing of the evidence for external Christian educational practices as influential upon the repositioning of bar mitzvah from a paternal ritual to an educational milestone."—Laura Yares, Journal of Jewish Education

“Michael Hilton’s book combines a thorough grounding in the primary sources and scholarly literature about the history of bar mitzvah with the experience of an established congregational rabbi. For anyone seeking insight into the origins, development, and significance of this major Jewish lifecycle event, this is the book to consult.”—Marc Saperstein, professor of Jewish history and homiletics at Leo Baeck College

“Bar mitzvah and bat mitzvah are contemporary Judaism’s best-known and least understood observances. Michael Hilton does a wonderful job of assembling the lore, laws, and customs regarding bar mitzvah and bat mitzvah in a way that is easily accessible to scholars, educators, and laypeople. Highly recommended!”—Rabbi Jeffrey K. Salkin, author of Putting God on the Guest List: How to Reclaim the Spiritual Meaning of Your Child’s Bar or Bat Mitzvah

Michael Hilton has been rabbi of Kol Chai Hatch End Jewish Community in London since 2001. He is the author of The Christian Effect on Jewish Life and coauthor of The Gospels and Rabbinic Judaism: A Study Guide.