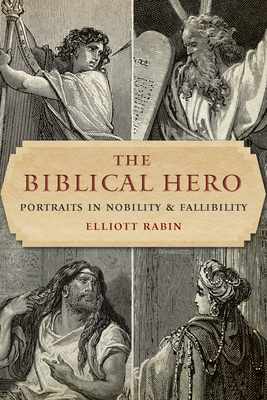 Portraits in Nobility and Fallibility

Approaching the Bible in an original way—comparing biblical heroes to heroes in world literature—Elliott Rabin addresses a core biblical question: What is the Bible telling us about what it means to be a hero?

Focusing on the lives of six major biblical characters—Moses, Samson, David, Esther, Abraham, and Jacob—Rabin examines their resemblance to hero types found in (and perhaps drawn from) other literatures and analyzes why the Bible depicts its heroes less gloriously than do the texts of other cultures:

* Moses founds the nation of Israel—and is short-tempered and weak-armed.
* Samson, arrogant and unhinged, can kill a thousand enemies with his bare hands.
* David establishes a centralized, unified, triumphal government—through pretense and self-deception.
* Esther saves her people but marries a murderous, misogynist king.
* Abraham's relationships are wracked with tension.
* Jacob fathers twelve tribes—and wins his inheritance through deceit.

In the end, is God the real hero? Or is God too removed from human constraints to even be called a “hero”?

Ultimately, Rabin excavates how the Bible’s unique perspective on heroism can address our own deep-seated need for human-scale heroes.

Elliott Rabin is the director of thought leadership at Prizmah: Center for Jewish Day Schools, where he edits HaYidion, the leading publication for Jewish day schools. He is the author of Understanding the Hebrew Bible: A Reader’s Guide.


Praise For The Biblical Hero: Portraits in Nobility and Fallibility…

"As Rabin’s excellent volume so expertly teaches us, the Bible's portrayal of its heroes inspires us today 'To have high expectations of our leaders and to tolerate their imperfections . . . Biblical heroes are role models precisely because of the difficulties they encounter, both out in the world and inside themselves.'"—Stu Halpern, Jewish Book Council
— Stu Halpern

“In this passionate, erudite, beautifully written book, Elliott Rabin makes a compelling spiritual and literary case for the flawed biblical hero. Drawing on sources ranging from rabbinic commentators to Shakespeare, he reminds us why generations of Jews over the millennia have embraced the biblical heroes as contemporaries, urging human beings in all our brokenness to aspire to spiritual greatness.”—Yossi Klein Halevi, senior fellow, Shalom Hartman Institute, Jerusalem
— Yossi Klein Halevi

“Elliott Rabin’s delightful and highly readable exploration of biblical narratives and their counterparts in ancient myths offers us fresh insights into Abraham, Samson, Esther, and other characters and forever changes how we experience their triumphs and struggles. Ultimately, The Biblical Hero is a story about us: complex human characters who, in heroic fashion, struggle with our imperfections.”—Rabbi Elie Kaunfer, CEO, Hadar Institute, and author of Empowered Judaism: What Independent Minyanim Can Teach Us about Building Vibrant Jewish Communities
— Rabbi Elie Kaunfer

“The book is both superbly written and easily readable. The subject matter is engaging, the world literature references are enlightening, and scholars and laypeople alike will benefit from the many insightful readings of familiar biblical texts.”—Gary A. Rendsburg, Blanche and Irving Laurie Professor of Jewish History, Rutgers University
— Gary A. Rendsburg

“The Biblical Hero offers us creative archetypes for understanding some of the most significant figures in biblical history and, arguably, Jewish life. Even more, it opens up a critical conversation about the hero’s role in society at a time when we need heroes more than ever.”—Erica Brown, associate professor, George Washington School of Education and Development
— Erica Brown

“What does it mean to be a hero? In this accessible volume, Elliott Rabin explores well-known biblical figures through the cultural and literary lenses of ‘heroes’ to unpack multiple dimensions of their characters. Readers who are curious about what biblical study has to offer students of leadership, character, and human fallibility will enjoy this examination of the complex lives of some of the Bible’s key figures.”—Miriam Heller Stern, national director, School of Education, Hebrew Union College–Jewish Institute of Religion
— Miriam Heller Stern

“The Biblical Hero invites the reader to experience a broad array of biblical characters as both heroes in their own time and paradigms of heroism that have echoed throughout literature and time. Rabin’s work is a rich examination of the intersection of power, influence, leadership, achievement, failure, and identity. I highly encourage readers of all ages to delve into this wonderful book.”—Marc Kramer, founder, Kramer Education Group
— Marc Kramer

"Whether you are Jewish or Christian or someone outside these two faith traditions, there will be a great reward from reading [The Biblical Hero]. . . . This is a book you'll want to add to your reading list and dive into it as soon as possible."—bobcornwall.com
— bobcornwall.com
or support indie stores by buying on
Copyright © 2020 American Booksellers Association