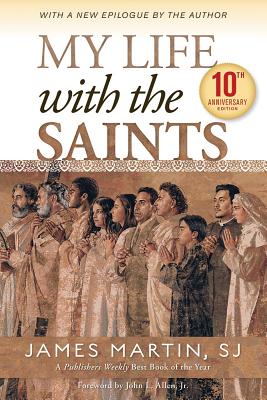 My Life with the Saints (10th Anniversary Edition) (Paperback)

One of Publishers Weekly’s Best Books of the Year
Winner of the Christopher Award
Winner of the Catholic Press Association Book Award
WITTY, WRYLY HONEST, AND ALWAYS ORIGINAL, My Life with the Saints is James Martin’s story of how his life has been shaped by some surprising friends—the saints of the Catholic Church. In his modern classic memoir, Martin introduces us to saints throughout history—from St. Peter to Dorothy Day, St. Francis of Assisi to Mother Teresa—and chronicles his lifelong friendships with them. Filled with fascinating tales, Martin’s funny, vibrant, and stirring book invites readers to discover how saints guide us throughout our earthly journeys and how they help each of us find holiness in our own lives.
Featuring a new chapter from Martin, this tenth-anniversary edition of the best-selling memoir updates readers about his life over the past ten years. In that time, he has been a New York Times best-selling author, official chaplain of The Colbert Report, and a welcome presence in the media whenever there’s a breaking Catholic news story. But he has always remained recognizably himself. John L. Allen, Jr., the acclaimed Catholic journalist, contributes a foreword that shows how Martin has become one of the wisest and most insightful voices of this era.

“An outstanding and often hilarious memoir.” —Publishers Weekly
“One of the best spiritual memoirs in years.” —Robert Ellsberg
“Remarkably engaging.” —U.S. Catholic
“Martin’s final word is as Jungian as it is Catholic: God does not want us to be Mother Teresa or Dorothy Day. God wants us to be most fully ourselves.” —The Washington Post Book World

JAMES MARTIN, SJ, is associate editor of America magazine. A prolific author, writer, and editor, his books include My Life with the Saints, A Jesuit Off-Broadway,Searching for God at Ground Zero, and In Good Company. He is the editor of Awake My Soul and Celebrating Good Liturgy. His articles have appeared in The New York Times, The Philadelphia Inquirer, The Tablet, and Commonweal. Fr. Martin resides in New York City.

Praise For My Life with the Saints (10th Anniversary Edition)…

Before you know it you're swept under his writerly wing, and riding along on his mystery tour of saints he wants you to know — and befriend. And through some transitive literary property, it works.
— Barbara Mahany

It isn’t often that a new and noteworthy book comes along in this genre, but we have reason to celebrate My Life with the Saints. It is earmarked for longevity. It will endure as an important and uncommon contribution to religious writing.

In a volume that is part spiritual memoir, part inspirational guide, Martin, a Jesuit priest and associate editor at America, applies the teachings of great saints to everyday life. Martin is interested in holding up the saints not as paragons but as exemplars of holy struggle. All the saints, he writes, struggled in one way or another. . . . Martin’s final word for us is as Jungian as it is Catholic: God does not want us to be like Mother Teresa or Dorothy Day. God wants us to be most fully ourselves.

Martin takes a splendid idea and develops it masterfully by weaving stories from his life into those of his favorite saints. Martin’s animated style and wide-ranging experiences will make this a book readers of diverse backgrounds will enjoy.

The saints are given to us as patrons and companions. James Martin tells us how they have been resources for him in every time of need. In delightful prose he recounts incidents, both perilous and funny, that have prompted him to turn to the saints, and in doing so shows us a new way of living out a devotion that is as old and universal as the church.

This wonderfully written volume interweaves the spiritual pilgrimage of a young Jesuit and his discovery of the saints of the Catholic tradition. Readers of this book will receive both the abundant gift of good writing and the more abundant grace that flows from the witness of the saints. Enthusiastically recommended.

The saints’ stories and their relevance to Martin’s own spiritual journey form the spine of this remarkably engaging book. A mix of history, memoir, social commentary, and spiritual exercise, My Life with the Saints reveals the familiar and not familiar stories of a handful of holy people.

In a cross between Holden Caulfield and Thomas Merton, James Martin has written one of the best spiritual memoirs in years. With help from the saints who have inspired and guided his way, he recounts a journey that is as entertaining as it is profound.