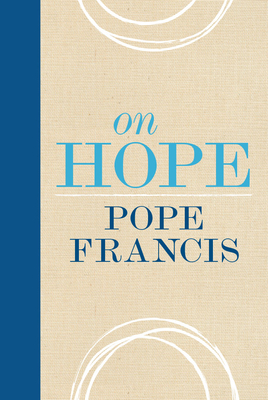 Pope Francis has a simple, life-changing message for you: God’s love can grace each of us with a lasting and sustaining hope, no matter how dark or confusing our situation. On Hope is Pope Francis at his most intimate and most inspiring.

“Life is often a desert, it is difficult to walk, but if we trust in God, it can become beautiful and wide as a highway. Never lose hope; continue to believe, always, in spite of everything. Hope opens new horizons, making us capable of dreaming what is not even imaginable.”
--Pope Francis

POPE FRANCIS was born Jorge Mario Bergoglio on 17 December 1936 in Buenos Aires, Argentina. As a young man, he worked briefly as a chemical technician and nightclub bouncer before entering the Jesuits. He was ordained a priest in 1969, and from 1973 to 1979, was Argentina's Provincial Superior of the Society of Jesus. He became the Archbishop of Buenos Aires in 1998, and was appointed a Cardinal in 2001. Following the resignation of Pope Benedict XVI on 28 February 2013, Bergoglio was named his successor on 13 March. He chose the name Francis in honor of Saint Francis of Assisi. He is the first Jesuit Pope, the first Pope from the Americas, the first Pope from the Southern Hemisphere, and the first non-European Pope in over 1200 years. Pope Francis has been noted for his humility, his concern for the poor, and his commitment to dialogue as a way to build bridges between people of all backgrounds, beliefs, and faiths.