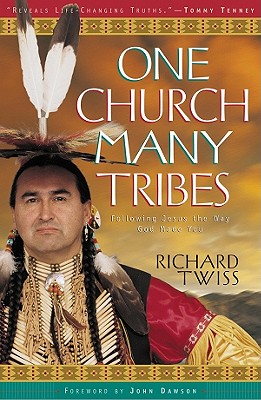 One Church Many Tribes

Since Columbus landed in the West Indies in 1492, Native American tribes have endured more than five centuries of abuse hypocrisy, indifference and bloodshed at the hands of the "Christian" white man. Despite this painful history, a number of Native Americans have found "The Jesus Way" and are proving to be a powerful voice for the Lord around the world. A full- blooded Lakota/Sioux whose bitterness toward whites was washed away by the blood of Christ, Richard Twiss shows that Native American Christians have much to offer the Church and can become a major force for reaching the lost. Full of wisdom, humor and passion, this book examines how the white Church can begin to break down the walls of anger, distrust and bitterness and move toward reconciliation and revival in our land.

RICHARD TWISS is a member of the Rosebud Lakota/Sioux Tribe. He believes that no other people group is so uniquely positioned by God for world evangelization as Native Americans. Co-founder and president of Wiconi International, Richard is also a member of the International Reconciliation Coalition. He has been a national conference speaker for Promise Keepers and has appeared as a guest on the "Focus on the Family" radio program. Richard, wife Katherine and their four sons live in Washington.
Loading...
or
Not Currently Available for Direct Purchase