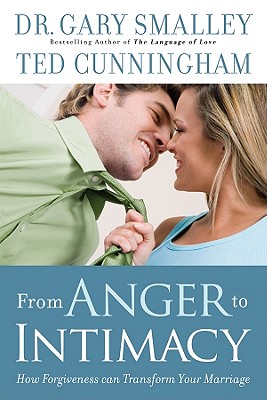 From Anger to Intimacy

How Forgiveness Can Transform Your Marriage

Did you know that spiritual, emotional, physical and relational exhaustion lead to, ANGER? And unresolved anger leads to sin. All couples deal with anger and how they respond (stuff it, spew it or study it), can make all the difference in their relationship and in their lives. In From Anger to Intimacy, Gary Smalley and Ted Cunningham explore this often maligned and God-given emotion that unless dealt with can strip us of everything we love. Now couples can learn the skills to: resolve conflict, hurt and pain in a healthy way, master their internal buttons so as to overcome feelings of anger, frustration and rage, use five specific tactics to deal with anger and rage when they rear their ugly heads, walk in the freedom God intends by learning the three essentials of forgiveness and five keys to nurturing a forgiving spirit, craft the perfect apology, remove the roadblocks to forgiveness once and for all, break sexual addiction and heal after an affair, and find answers to big questions about anger and forgiveness in their marriage.

GARY SMALLEY is president and founder of the Smalley Relationship Center, which presents conferences nationwide and provides resources for families and churches. Combined, his books have sold more than 6 million copies. The Blessing and The Two Sides of Love won the Gold Medallion Award for excellence in literature, and The Language of Love won the Angel Award for best contribution to family life. Gary has been a guest on numerous national TV shows, including The Oprah Winfrey Show, Larry King Live and NBC's Today. He is the coauthor, with Ted Cunningham, of The Language of Sex and From Anger to Intimacy.

TED CUNNINGHAM is the founding pastor of Woodland Hills Community Church in Branson, Missouri. Woodland Hills was planted in 2002 and received a Purpose Driven Church Health Award in 2006. Ted is a speaker with the Smalley Relationship Center and coauthor of The Language of Sex and From Anger to Intimacy with Gary Smalley. He is a graduate of Liberty University and Dallas Theological Seminary. He and his wife, Amy, have two wonderful children, Corynn and Carson.
Loading...
or
Not Currently Available for Direct Purchase