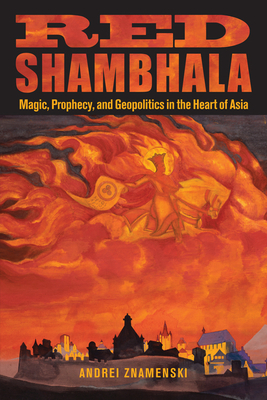 Magic, Prophecy, and Geopolitics in the Heart of Asia

Many know of Shambhala, the Tibetan Buddhist legendary land of spiritual bliss popularized by the film, Shangri-La. But few may know of the role Shambhala played in Russian geopolitics in the early twentieth century. Perhaps the only one on the subject, Andrei Znamenski's book presents a wholly different glimpse of early Soviet history both erudite and fascinating. Using archival sources and memoirs, he explores how spiritual adventurers, revolutionaries, and nationalists West and East exploited Shambhala to promote their fanatical schemes, focusing on the Bolshevik attempt to use Mongol-Tibetan prophecies to railroad Communism into inner Asia. We meet such characters as Gleb Bokii, the Bolshevik secret police commissar who tried to use Buddhist techniques to conjure the ideal human; and Nicholas Roerich, the Russian painter who, driven by his otherworldly Master and blackmailed by the Bolshevik secret police, posed as a reincarnation of the Dalai Lama to unleash religious war in Tibet. We also learn of clandestine activities of the Bolsheviks from the Mongol-Tibetan Section of the Communist International who took over Mongolia and then, dressed as lama pilgrims, tried to set Tibet ablaze; and of their opponent, Ja-Lama, an "avenging lama" fond of spilling blood during his tantra rituals.

Praise For Red Shambhala: Magic, Prophecy, and Geopolitics in the Heart of Asia…

"The above [Alexander Barchenko, Ja-Lama and Nicholas Roerich]are only three out of the eleven figures historian Andrei Znamenski introduces at the beginning of Red Shambhala, and in their oddness and ambition--and the oddness of their ambitions--they are representative of the eccentric would-be messiahs (sincere and otherwise) who populate Znamenski's lively account of the ways traditional beliefs common in Tibet, Mongolia, and surrounding areas came into play in the competition between Russia and England for dominance in that region." --David Cozy, Japan Times

"I've been waiting for a good excuse to bring up Andrei Znamenski's Red Shambhala: Magic, Prophesy, and Geopolitics in the Heart of Asia. The coming exhibition of Buddhist art at New York's Asia Society has provided one. Published by Quest Books (the publishing house of the Theosophical Society), Red Shambhala is a serious work of scholarship, that explores attempts to co-opt and manipulate Buddhism in Tibet and Mongolia by Russian Bolsheviks after the October Revolution, as well as other curious characters." --European Son blog
— Reviews

"Znamenski describes the myths and prophecies in some detail, but the story itself starts in the immediate aftermath of the Russian Revolution. The Bolshevik secret police, and none other than Gleb Bokii, the chief cryptographer, had become interested in mysticism, telepathy and in the "ancient science" of Shambhala, whose existence they did not entirely discount...Znamenski tells a good story, balancing research with storytelling.
" --Asian Review of Books

"Those lacking specialized knowledge of arcana have not learned much of this story, for until the fall of the Soviet empire, many records have been sequestered or linger in Russian-language academic journals. A few very minor slips in English usage reflect the author's Russian origins, but these occasions are far outweighed by the valuable contributions he provides so the rest of us can learn about these events and their scholarly sources. The transcripts forced out of doomed prisoners about their role in this Red Shambhala project make for poignant reading.
" --PopMatters.com

"Red Shambhala enters a maze of intrigue with a colourful cast of Bolshevik secret police officers, spies, occultists, Mongolian warlords and Buddhist monks. Andrei Znamenski shows how Soviet Communists in the 1920s sought geopolitical influence over Mongolia and Tibet, projecting their world revolution onto ancient messianic prophecies amongst Inner Asian tribesmen. Inspired by the myth of hidden sages directing the world's destiny, the Roerichs add visionary adventure amid the great game of competing powers, England, Russia, China, for mastery of the East. A first-rate espionage story, all from recently opened Soviet archives.
" --Nicholas Goodrick-Clarke, author of The Occult Roots of Nazism and Black Sun

Andrei Znamenski studied history and anthropology both in Russia and the United States. Formerly a resident scholar at the Library of Congress, then a foreign visiting professor at Hokkaido University, Japan, he has taught at The University of Memphis and Alabama State University. His fields of interests include religions of indigenous people of Siberia and North America, shamanism, and esotericism. Znamenski is the author of Shamanism and Christianity (1999), Through Orthodox Eyes (2003), Shamanism in Siberia (2003), The Beauty of the Primitive: Shamanism and Western Imagination (2007), and the editor of the three-volume anthology Shamanism: Critical Concepts (2004).