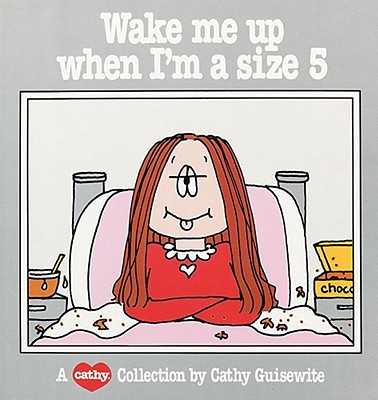 "A delightfully amusing tribute to the young, single woman of today and all she has to cope with. Right on the button." --Mademoiselle

"Cathy (is) the feminist's "Charlie Brown"...She"s funny, a little sad, and exactly like somebody everybody knows." --Glamour

"She's a role model for the modern woman, a hard-charging softie wavering between Ms. and Mr. Right, a new-age female with old-fashioned roots, who calls the shots but still calls home." --Success Magazine

The Cathy phenomenon began in 1976 when, to avoid the embarrassment of having her mother do it for her, Cathy Guisewite sent some cartoon samples to Universal Press Syndicate. When a contract arrived in the mail just days later, Guisewite "called Mom, bought a drawing board, and ate a box of donuts."

Now appearing internationally in newspapers and on countless refrigerators, bulletin boards, and desks, Guisewite's Cathy has become a spokeswoman for women everywhere. Guisewite creates comic strips that are "for everyone whose life revolves around food, love, mother, and career...the four basic guilt groups."

Cathy Guisewite is the creator of the “Cathy” comic strip which ran daily in nearly 1,400 newspapers from 1976 to 2010. Launched when there were almost no female voices on the comic pages, the strip became a deeply personal touchstone for women wrestling with a changing world. The strip earned Guisewite the National Cartoonist Society Reuben Award in 1992, an Emmy Award for Outstanding Animated Program for the TV special Cathy in 1987, and the high honor of having her work displayed on the fronts of refrigerators across the land, right next to the food.