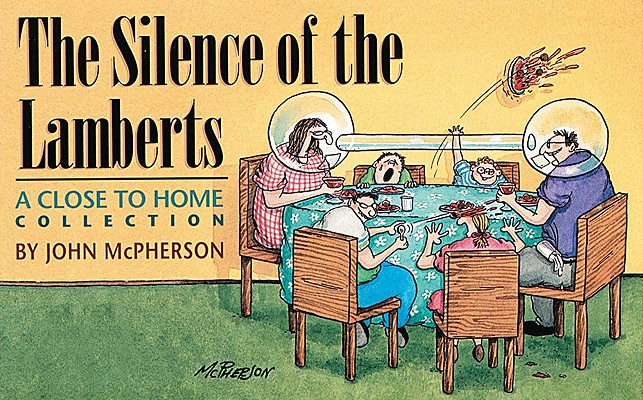 The Silence of the Lamberts

A Close to Home Collection

"While the phrase "something for everyone" is often misused, Close to Home does indeed have something to appeal to all ages." --Daily News, Bowling Green, Kentucky

Have you ever had a cavity, and you're afraid to get it filled, so you just let it go, and let it go, until eventually your entire face is just one, huge cavity to the point that your friends don't even recognize you anymore? Neither have we.

But it could happen! In fact, it did happen, in a very, very, strange and amusing world known as Close to Home. A world where acupuncture is used to cure a golfer's slice, babies are strapped to running lawn mowers to ease colic, and supermarket shoppers bob for lobsters.

Since it burst onto the funny pages in 1992, Close to Home has garnered rave reviews from the creator's mother. Millions of other readers around the world agree. Silence of the Lamberts is a favorite with anyone who has a penchant for things bizarre, irreverent, and hilarious. At the very least, it will show you what can happen if you let that cavity go untended for too long.

John McPherson hails from Painted Post, New York. He holds mechanical engineering and English degrees from Bucknell University and began drawing Close to Home in 1992. He currently resides in upstate New York with his two sons.
Loading...
or
Not Currently Available for Direct Purchase