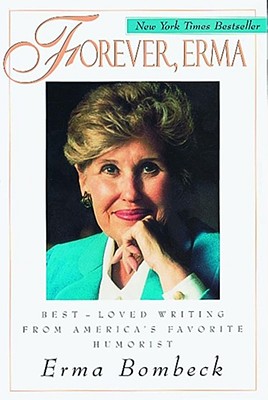 "A lot of columnists write words to end up in the Congressional Record or on the president's desk or at the Pulitzer Committee's door. But Erma Bombeck went us all one better. Her words won her the permanent place of honor in American life: the refrigerator door. Now we are again at wit's end."--Ellen Goodman

"Erma Bombeck may be gone, but she'll live forever in her columns. A fitting finale for the much-loved humorist." --Booklist

"Forever, Erma is a modest measure of our loss." --The New York Times Book Review

Erma Bombeck's own aversion to producing books of column collections over the years made the family and publisher of the hardcover Forever, Erma apprehensive about its public acceptance.

The pubic proved Erma's misgivings were unfounded. Within nine weeks of the publication date, the book had climbed to number three on The New York Times best-seller list. It remained on the list for a total of fifteen weeks. Over 400,000 copies had been bought by her loyalists and their friends and families.

The success of the hardcover edition expands Erma's literary legacy. Now the paperback edition of Forever, Erma will reach new generations. We all see ourselves in her words.

Only the emotional spectrum of this book matches its topical diversity. One's feelings are reminiscent of the same warmth and tenderness only Erma could portray, and readers will be delighted to find their favorite selections. Included with 188 other columns are her first, "Children Cornering the Coin Market," from January 1965, and her last one, "Let's Face It," from April 1996.

As in the hardcover edition, a tribute chapter includes remembrances from some of Erma's family, friends, and colleagues, including Phil Donahue, Art Buchwald, and Ellen Goodman.

Readers around the world loved Erma Bombeck and cherished every one of her columns. Forever, Erma, will give them a classic way to hold on to this most gifted writer. As Phil Donahue said, "We shall never see the likes of her again. She was real and she brought us down to earth--gently, generously, and with brilliant humor. When the scholars gather hundreds of years from now to learn about us, they can't know it all if they don't read Erma."

Beloved for her wry yet warm look at family life, Erma Bombeck was America's favorite humorist at the time of her death in 1996. Ten of her 13 books, including Forever, Erma, appeared on the New York Times best-seller list. She claimed her first fiction writing was the weather forecast in the Dayton Herald. Her favorite food was pasta, and her hobby was dust.
Loading...
or
Not Currently Available for Direct Purchase