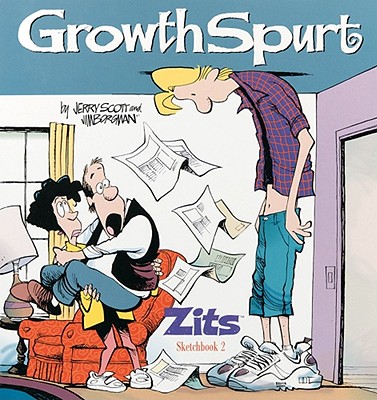 "With these instantly familiar characters, Scott and Borgman create laser-accurate slices of family life in a handful of skillfully drawn vignettes each day. Their special genius is viewing the always baffling, often stressful care and feeding of teens as light(hearted) work."—Milwaukee Journal Sentinel

Is it any wonder that 15-year-olds feel caught in the middle? They're revved up with childhood energy yet trying to downshift to what they think is "adult cool." If their age group didn't already possess every morsel of knowledge in the universe, it could be downright confusing!

Zits is front and center on the comics scene, following the life of Jeremy Duncan, age 15, as he works his hardest to figure it all out. It's unfortunate that Jeremy has to live with those time warp weirdos some call his parents, but he tolerates them as long as they don't get in the way of his chief interests: music and hanging with his friends.

In Growth Spurt, Scott and Borgman hilariously illustrate the ups and downs of adolescence—particularly when, like Jeremy, you're cursed with an older brother who's perfect, burdened by your "do-I-have-to-admit-I-really-know-them" parents, and majorly handicapped by having to go to high school.

With his laid back outlook, Jeremy is making the best of it, even when it means lifeguarding the Aqua Aerobics for Seniors class with his friend Hector, or having a mom who doesn't even understand that she doesn't understand him, or inadvertently telling his girlfriend, Sara, that her freckles are nice because they hide her acne. Zits looks at the teenage years with charm and a healthy dose of warmth and humor.