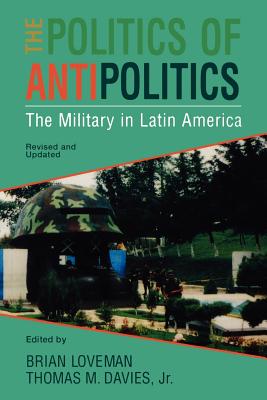 The Politics of Antipolitics (Paperback)

Latin America is moving toward democracy. The region's countries hold elections, choose leaders, and form new governments. But is the civilian government firmly in power? Or is the military still influencing policy and holding the elected politicians in check under the guise of guarding against corruption, instability, economic uncertainty, and other excesses of democracy? The editors of this work, Brian Loveman and Thomas M. Davies, Jr., argue that with or without direct military rule, antipolitics persists as a foundation of Latin American politics. This study examines the origins of antipolitics, traces its nineteenth- and twentieth-century history, and focuses on the years from 1965 to 1995 to emphasize the somewhat illusory transitions to democracy. This third edition of The Politics of Antipolitics has been revised and updated to focus on the post-Cold War era. With the demise of the Soviet state and international Marxism, the Latin American military has appropriated new threats including narcoterrorism, environmental exploitation, technology transfer, and even AIDS to redefine and relegitimate its role in social, economic, and political policy. The editors also address why and how the military rulers acceded to the return of civilian-elected governments and the military's defense against accusations of human rights abuses.
or
Buy Here
Copyright © 2020 American Booksellers Association