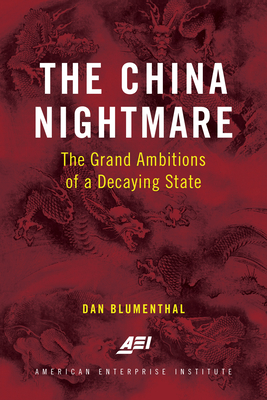 The Grand Ambitions of a Decaying State

This is a book about China's grand strategy and its future as an ambitious, declining, and dangerous rival power. Once the darling of U.S. statesmen, corporate elites, and academics, the People's Republic of China has evolved into America's most challenging strategic competitor. Its future appears increasingly dystopian. This book tells the story of how China got to this place and analyzes where it will go next and what that will mean for the future of U.S. strategy. The China Nightmare makes an extraordinarily compelling case that China's future could be dark and the free world must prepare accordingly.

Dan Blumenthal is the director of Asian studies at the American Enterprise Institute, where he focuses on East Asian security issues and Sino-American relations. Mr. Blumenthal has both served in and advised the US government on China issues for over a decade. From 2001 to 2004, he served as senior director for China, Taiwan, and Mongolia at the Department of Defense. Additionally, he served as a commissioner on the congressionally-mandated US-China Economic and Security Review Commission since 2006-2012, and held the position of vice chairman in 2007. He has also served on the Academic Advisory Board of the congressional US-China Working Group. Mr. Blumenthal is the co-author of An Awkward Embrace: The United States and China in the 21st Century (2012).
Loading...
or support indie stores by buying on