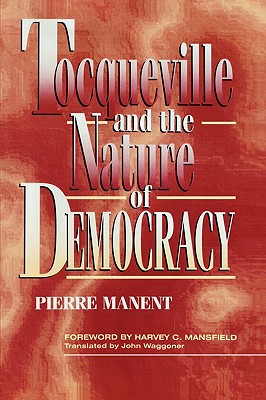 Tocqueville and the Nature of Democracy

One of France's leading and most controversial political thinkers explores the central themes of Tocqueville's writings: the democratic revolution and the modern passion for equality. What becomes of people when they are overcome by this passion and how does it transform the contents of life? Pierre Manent's analysis concludes that the growth of state power and the homogenization of society are two primary consequences of equalizing conditions. The author shows the contemporary relevance of Tocqueville's teaching: to love democracy well, one must love it moderately. Manent examines the prophetic nature of Tocqueville's writings with breadth, clarity, and depth. His findings are both timely and highly relevant as people in Eastern Europe and around the world are grappling with the fragile, complicated, and frequently contradictory nature of democracy. This book is essential reading for students and scholars of political theory and political philosophy, as well as general readers interested in the nature of modern democracy.