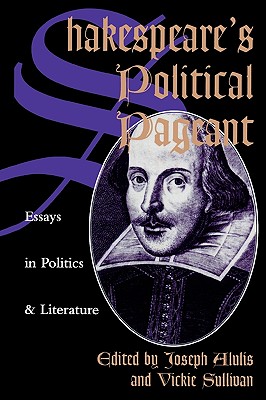 Essays in Politics and Literature (Studies in Social)

Literary works, through their very personal means of characterization, reveal the direct effect of politics on individuals in a way a political treatise cannot. The distinguished contributors to this volume share the belief that Shakespeare is the author who most effectively sets forth the multifarious pageant of politics. Shakespeare's rich canon presents monarchy and republic, tyrant and king, thinker and soldier, and Christian and pagan. The twelve essays in Shakespeare's Political Pageant discuss a broad range of Shakespeare's dramatic poetry from the perspective of the political theorist. This innovative book demonstrates the immense value of seeing Shakespeare's plays in the context of political philosophy. It will be an important source for students and scholars of both political science and literature.

Joseph Alulis is lecturer at the Center for Continuing Studies, Basic Program, University of Chicago. Vickie Sullivan is assistant professor of political science at Tufts University.
Loading...
or support indie stores by buying on