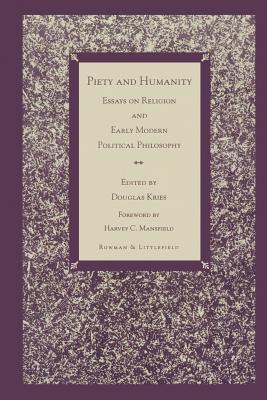 The nature of the relationship between early modern political philosophy and revealed religion has been much debated. The contributors to Piety and Humanity argue that this relationship is one of dissonance rather than concord. They claim that the early modern political philosophers found revealed religion-especially Christianity-to be a threat to the modern political project, and that these philosophers therefore attempted to transform revealed religion so that it would be less of a threat, and possibly even an aid. Each essay is devoted to a particular work by a single political philosopher; the thinkers and works discussed include Machiavelli's Exhortation to Penitence, Francis Bacon's New Atlantis, Spinoza's Theologico-Political Treatise, and Locke's Reasonableness of Christianity. Each essay is followed by a brief selected bibliography. This book will be of great importance to philosophers, political theorists, and scholars of religion and early modern European history.

Douglas Kries is associate professor of philosophy at Gonzaga University. He is the co-translator and co-editor of Augustine: Political Writings, and his articles have appeared in Review of Politics, Thomist, and Proceedings of the Patristic, Medieval, and Renaissance Conference.
Loading...
or support indie stores by buying on