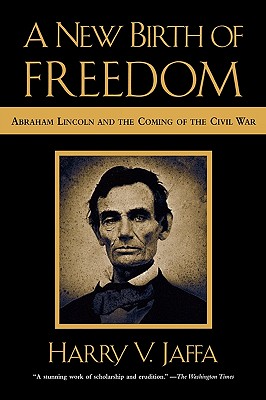 A New Birth of Freedom

Abraham Lincoln and the Coming of the Civil War

A New Birth of Freedom is the culmination of over a half a century of study and reflection by one of America's foremost scholars of American politics, Harry V. Jaffa. This long-awaited sequel to Crisis of the House Divided, first published in 1959, continues Jaffa's piercing examination of the political thought of Abraham Lincoln and the themes of self-government, equality, and statesmanship. Whereas Crisis of the House Divided focused on the famous senate campaign debates between Lincoln and Stephen Douglas, this volume expands and deepens Jaffa's analysis of American political thought, and gives special attention to Lincoln's refutation of the arguments of John C. Calhoun--the intellectual champion of the Confederacy. According to Jaffa, the Civil War is the characteristic event in American history--not because it represents a statistical frequency, but rather because through the conflict of that war we are able to understand what is fundamentally at stake in the American experiment in self-government.

Harry V. Jaffa is the Henry Salvatori Professor of Political Philosophy Emeritus at Claremont McKenna College and Claremont Graduate University, a distinguished fellow of the Claremont Institute, and the author of ten books.
Loading...
or
Not Currently Available for Direct Purchase