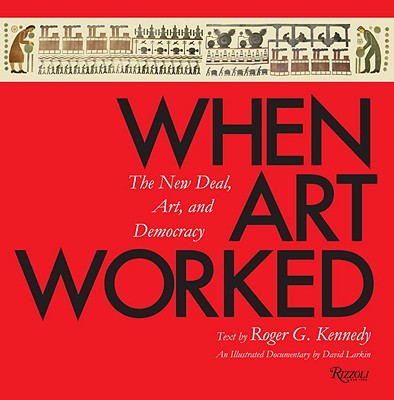 The New Deal, Art, and Democracy

What artists and their work did for the United States during the Depression, thanks to New Deal initiatives, is the subject of this masterfully produced book. When Art Worked focuses on the consequences of the art and architecture created and its efficacy in enhancing the nation’s sense of itself during this debilitating time. With an astoundingly high unemployment rate in the country—at 25 percent—New Deal policies provided food, work, and, with the aid of art, hope grounded in common purposes. Art became a vital tool in rallying pride, illuminating common necessities, arousing an awareness of the suffering of people, and drawing attention to the need for natural resource conservation. This had an indelible impact on public policy. New construction and renovations of post offices, schools, and government buildings reinspirited communities. When Art Worked also focuses on the objectives of the leaders who shaped the New Deal programs, and features some of the era’s most remarkable achievements. The text is accompanied by approximately 450 rarely seen or published color and black-and-white illustrations and newly commissioned photographs of some of the incredible works produced.


Praise For When Art Worked: The New Deal, Art, and Democracy…

"As usual, Roger Kennedy has hit the nail on the head with this remarkably clear look at the art that came out of one of our darkest hours, an art that not only expressed the struggle, but now stands for much of how we understand it."
- Ken Burns

"Oh, what a gorgeous and informative new book by Roger Kennedy: When Art Worked: The New Deal, Art, and Democracy---just out from Rizzoli.  The WPA made infrastructure and made art, and made them together, and revived America. Roger has the inside story as no one else could. Inspiring stuff at every level.  A true long-now book.  Its bright red cover calls for a Christmas tree to put over it."
- Stewart Brand, Founder of The Whole Earth Catalog

Roger G. Kennedy is a former director of the National Park Service and director emeritus of the National Museum of American History. He has written numerous books and articles on the history and architecture of the United States.

David Larkin is an editor, designer, and authority on vernacular styles. His previous Rizzoli books include "American Masterworks, Farmhouse, Barn," and "American Home."
Loading...
or
Not Currently Available for Direct Purchase