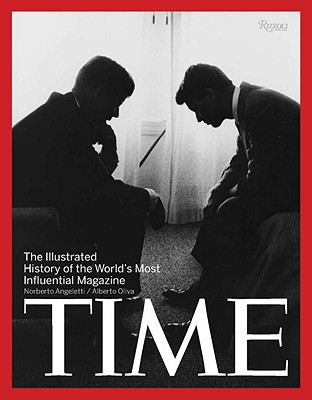 The Illustrated History of the World's Most Influential Magazine

The history of Time—from its inception to its iconic status today—recounted by its world-famous editors, art directors, and stellar cast of contributors.

Time is a fascinating look at the history of the world's most influential newsweekly. The complete compendium is illustrated with hundreds of covers and archival photographs, featuring the work of the twentieth century's most respected journalists, editors, and photographers—from Eddie Adams, Neil Leifer, Dirck Halstead, and David Hume Kennerly, to David Burnett, Gregory Heisler, Matt Mahurin, James Nachtwey, and Diana Walker, who together won more major photo awards for Time than all other publications combined. This volume explores Time's documentation of seminal moments in history, including the moon landing, the Kennedy assassination, Vietnam, the Gulf War, and September 11th. It investigates the reasons behind Time's "Man of the Year," transitions in design, the creation of the symbolic red frame, the important designers and illustrators, the covering of both hot and soft news, as well as the magazine's changeover to the 21st century and the creation of Time's international editions.


Praise For Time: The Illustrated History of the World's Most Influential Magazine…

"Rizzoli has just published a beautiful 432-page coffee-table book called TIME: The Illustrated History of the World's Most Influential Magazine. We don't quibble with the title. The book's authors, Norberto Angeletti and Alberto Oliva, spent six years doing research and have produced a book that is not only a stunning visual history of TIME but also a cultural history of the times we have lived in." ~TIME

"Here, Angeletti and Oliva (coauthors, In Vogue) gloriously showcase both the magazine and U.S. history... the book covers an amazing amount of material... Interviews with authors, designers, photographers, editors, and others lend a personal feel. VERDICT: An excellent volume for news junkies; enjoyable to both browse and read." ~Library Journal

"…readers are….likely to relish many of the book's 600 or so captivating photographs and illustrations, starting with Pope John Paul II praying at the Western Wall in 2000." ~Wall Street Journal

"It's a real book through and through, with a ton of information and back story.  Its an amazing book and a must-have for everyone!  We highly, highly recommend it." ~BookLegion.com

"...an exemplary job of capturing the deep history of both the journalistic chronicler of our times and therefore the actual history of our times itself. A major work on all fronts." ~BlogOnBooks.com

Norberto Angeletti and Alberto Oliva have been working in journalism for thirty-five years. They have been keynote speakers at the Magazine Publishers Association of America (MPA) as well as international journalism forums. They are co-authors of the book "In Vogue." Richard Stengel has a long history at "Time" and is currently the managing editor. He has also authored several books.
Loading...
or
Not Currently Available for Direct Purchase