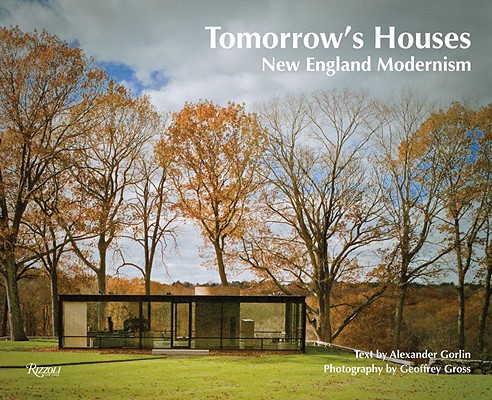 A dazzling showcase of hidden jewels by the masters of twentieth-century modernist architecture in New England. Tomorrow’s Houses is a richly photographed presentation of the best modernist houses in Connecticut, Massachusetts, Maine, New Hampshire, and Vermont, built during the early twentieth century through the 1960s. From the suburbs of Connecticut to the mountains of New Hampshire and Vermont, modernism in America found some of its earliest, most idealistic, and, later, most refined realizations in houses designed by such masters as Frank Lloyd Wright, Philip Johnson, Mies van der Rohe, Richard Meier, Paul Rudolph, Marcel Breuer, and Walter Gropius, all of whose work is featured in these pages. Photographer Geoffrey Gross has captured in stunning full-color images these precisely composed structures and their exquisitely appointed interiors, all against the breathtaking variety of the landscapes of New England. Lauded architect and critic Alexander Gorlin places these beautiful houses in their proper historical context as examples of the best of early- and mid-twentieth-century American modernist architecture.

Alexander Gorlin established his architectural practice in 1986. He is the author of a two-volume series, The New American Town House, and the subject of a monograph, all published by Rizzoli. Geoffrey Gross is the photographer of Rizzoli's Stone Houses, Great Houses of New England, and Old Homes of New England.

“This book’s lush, panoramic photography is the next-best thing to a road trip to visit all of the region’s modernist homes.” ~Details

“And now, thanks to a brand-new book, Tomorrow’s Houses: New England Modernism, this important piece of American architectural history is available to all, and preserved for the ages… What I love most about the book, however, is its horizontal format. When flopped open to a two-page spread—which measures an amazing 22 inches wide!—the rich photographs come alive, and it feels as if you could step right into the homes.” ~This Old House

“Architect Alexander Gorlin has assembled an unusual and thoroughly delightful survey of the modernist houses dotting states from Connecticut to Maine.” ~Interior Design