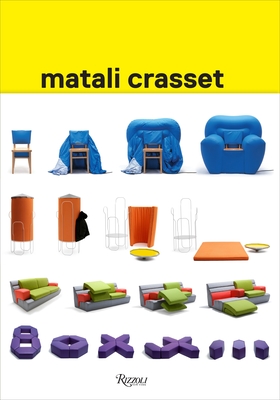 An innovatively designed monograph on the work of Matali Crasset, one of France’s leading product designers. A darling of French industrial design, Matali Crasset has earned critical praise internationally with her unique spaces and products. Ranging from simple, ergonomic kitchen utensils to architecture, her work engages its end users by asking questions on the role design plays in their everyday lives. Crasset was awarded International Interior Designer of the Year at the British Interior Design Awards in 2004, received the Grand Prize for Design from the city of Paris in 1997, and was a previous recipient of the Premier Prix de Concours Louis Vuitton. Her work includes products and interventions for Philippe Starck (whom she worked with for five years), Established and Sons, Hermès, Swarovski, Authentics, Domeau & Pérès, Alessi, Meta/Mallet, Artemide, and others. She has also engaged in architecture in the round, including hotels in Nice and Tunisia. Raised in a small village in the north of France, where work and life were intimately bound, the designer’s formative experiences clearly inform her view on contemporary design. The uncluttered rhythms of life in the country are reflected in the simple—but often colorful—forms that have earned Crasset a name for herself in the realms of product design, interiors, architecture, and art installations. Lavishly depicted with more than three hundred sketches, concept renderings, and photographs in a unique and brightly hued book format, the projects are organized thematically, with a special emphasis on materials and process.

Matali Crasset is the principal of her own Paris-based industrial design and was awarded International Interior Designer of the Year at the British Interior Design Awards in 2004, Grand Prize for Design by the city of Paris in 1997, and is a previous recipient of the Premier Prix de Comcours Louis Vuitton. Zoe Ryan is curator for design at the Art Institute of Chicago. Alexandra Midal is a design writer based in Paris and Los Angeles.
or
Not Currently Available for Direct Purchase