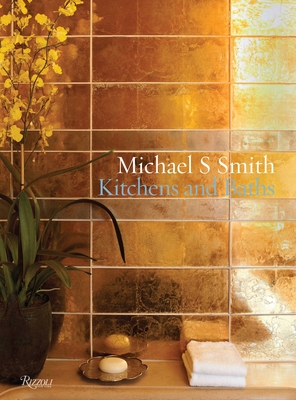 The newest book from acclaimed designer Michael S. Smith showcases his exceptional take on kitchens and baths, the busiest yet most personal rooms in a home. Legendary designer Michael S. Smith has stories to tell about kitchens and bathrooms-those he has designed himself, and those that inspire him. In this fascinating and inspirational book, Smith, who has his own line of kitchen and bath fixtures for Kohler, explains how these rooms define a house.
Kitchens and bathrooms are among the most expensive and labor-intensive rooms to design. But they are also opposites, the most public and private zones of a house. In three in-depth case studies and dozens of supporting examples, Smith discusses his design process for these rooms, from big-picture issues such as the social engineering of the kitchen’s layout to details large and small, including the importance of choosing the right cabinet, which can be a crystallization of the architecture of the house, as well as countertops, fixtures, floors, hardware, and more.
Also including a sampling of dressing rooms and breakfast rooms, along with a comprehensive resource section, this is a uniquely sophisticated take on a subject of perennial interest.

"Obama White House designer Michael S. Smith tackles kitchens and baths, two of the most challenging rooms in the home—combining inspiring images of Smith’s projects from around the world with his practical insights. A resources section gives recommendations for everything from appliances to wall coverings." ~Architectural Digest

"After doing up the Obamas' White House, Michael S. Smith -- interior designer to the Hollywood elite and lesser (but no less affluent) mortals -- pulls on the rubber gloves with his latest coffee-table tome, "Kitchens and Baths." Utilizing as visual examples homes he designed -- as well as others he admires for their eating and bathing zones Mr. Smiths book is broken into regions ("Beach," "Town," "Country") that provide loads of inspiration. Ultimately, perfecting pantry and potty is a game of hide and seek: keeping the inner workings concealed but reachable." ~Wall Street Journal

"...it’s quite thoughtful of Smith to hone in on that niche and deliver inspiration targeted at those who are in search of inspiration for the two rooms in which most people spend a good bulk of their time." ~La Dolce Vita

Michael S. Smith, one of Architectural Digest’s 100 Top Designers and the winner of Elle Decor’s Designer of the Year Award in 2003, is regularly featured in Architectural Digest, Elle Decor, and House Beautiful. Christine Pittel is a senior editor at House Beautiful whose writing has also appeared in the New York Times and House & Garden.
Loading...
or
Not Currently Available for Direct Purchase