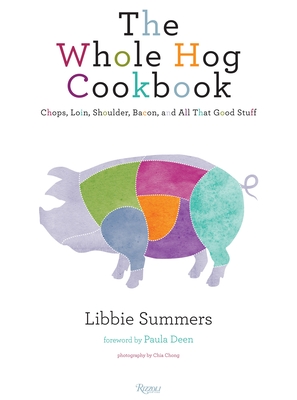 Chops, Loin, Shoulder, Bacon, and All That Good Stuff

There’s a whole world of pork to love, as demonstrated in this cookbook devoted to every cut of the hog. Plump sausages sputtering on the grill, thick bacon sizzling in a pan, a juicy pork chop from the oven-pork comes in so many wondrous forms. From grilling and frying to braising and pickling, author Libbie Summers has a special way with pork, taking comfortable old-fashioned dishes and updating them with fun and stylish twists.
Summers grew up on a hog farm in Missouri-even wrestling pigs as a kid at the state fair-and grew to become the culinary producer for Paula Deen, who instilled in her a Southerner’s affection for the pig.  Most of her recipes have a down-home accent, but many reflect international influences too: Sweet Tea Brined Pork Shoulder, Pork Chops and Applesauce, Pork Belly Gyros, Pork Pies, and Jerk Roasted Tenderloin. Chapters are divided according to primal cuts, such as the shoulder, loin, bacon, and ribs. How-to sections show you how to make your own fresh sausage, tie up a crown roast, and cure bacon. In her writing, Summers takes up the cause of the much-maligned pig and reminds us that the best way to honor an animal is to appreciate every part, wasting nothing.

Libbie Summers is the culinary producer for Paula Deen’s network shows and the senior food editor for Paula Deen Enterprises. She has styled and developed recipes for such clients as the Food Network, Smithfield Hams, and Kraft. Paula Deen founded The Lady and Sons Restaurant, which specializes in Southern cooking in Savannah, Georgia. She is the author of eight best-selling cookbooks. She publishes a bimonthly magazine, Cooking with Paula Deen, and is a regular guest on QVC.

Praise For The Whole Hog Cookbook: Chops, Loin, Shoulder, Bacon, and All That Good Stuff…

"I can honestly say that The Whole Hog Cookbook is filled with love. Love for pigs and all of their beautiful parts...The photography is professional, but playful. It mirrors Libbie's personality perfectly, and really captures how personal these recipes and stories are. They are down home and honest. They truly come not only from the farm, but from Libbie's heart... Oink oink. This book is too much fun!" ~Mission: Food

"The woman knows her swine. (And, to Grandma Summers' credit, she's got a wicked sense of humor...)." ~Bon Appetit

"For this 192-page ode to the other white meat, the Georgia chef draws inspiration from Greece, Spain, and the American South. Check out her country ham and buttermilk biscuits with clementine prosecco marmalade." ~Country Living