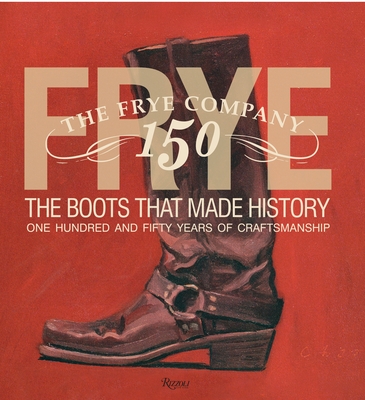 The Boots That Made History: 150 Years of Craftsmanship

Jackie O. wore them, as did John Lennon. Icons as diverse as Bruce Springsteen, Julia Roberts, Sarah Jessica Parker, wear them today. They are the timeless Frye boots!

In 1863, John A. Frye opened the doors of a small shoe shop in Marlboro, Massachusetts. the shoes he made were to ease the everyday life of factory workers in that small New England town. Over a century later, the Frye Company has become the oldest continuously operating footwear brand in America. The boots Frye made weren’t meant to be icons of fashion, yet somewhere along the line, they became just that. FRYE: THE BOOTS THAT MADE HISTORY is a 150-year anniversary album that celebrates the early history of the brand, its cultural takeover in the early 1970s, and the artisanal methods that make its craftsmanship unique.

Frye boots are captured in all the ways they are worn: rocked out and urbanized, accessorized and envied, worked and roughed up, flaunting their inimitable style and all-American cool. This book takes the reader through the style and personality of the distinctive designs and handsome detailing of Frye’s most popular products, from its tough, treasured and instantly recognizable Harness Boot to the exclusive line dedicated to the American flag debuting this fall. With the strongest leather–enough to withstand 20 lbs. of pressure–and dozens of designs, the quality of Frye has always remained the same, making the brand not just a business but a way of life.

Architecture and design writer Marc Kristal has written, co-authored or contributed to more than a dozen books, notably Immaterial World: Transparency in Architecture and The Great American House (with Gil Schafer III). As a journalist, Kristal has written for the New York Times, Architectural Digest, Elle Decor, Wallpaper, Interior Design, and Metropolis, among other publications, and was a contributing editor of Dwell. The Frye Company: Each generation of Frye craftsmen dedicated themselves to the art of shoemaking, creating new patterns, discovering new materials, and even inventing shoe-making machinery. The dedication to crafting footwear as functional as it is durable has been the company’s benchmark ever since. The Frye Company’s heritage is told in every stitch of every shoe made over the last 150 years: across cultural shifts and changes in fashion, for generation upon generation. Now, Frye boots are accessorized and envied on city streets, worked and roughed up on country roads, and chosen above all others for their inimitable style and uncompromising quality.

Praise For Frye: The Boots That Made History: 150 Years of Craftsmanship…

“If you have any interest in the history of a true American classic brand, order a copy.” ~Selectism

“The book is full of amazing ye ole pictures of the family, the factory and even a newspaper clipping of First Lady Jackie Kennedy and her Frye riding boots. There are also excellent images of the factory through the ages and advertisements that would make Don Drapper jealous…you are immersed in all things Frye…” ~The Manual

“Frye is a love letter and photo album of sorts, highlighting the brand’s enduring footwear, craftsmanship and famous fans. It’s a fun look back to how influential and prevalent Frye footwear has been for decades, especially in the ‘60’s and ‘70s. There also are artful photos of the shoemaking process and a jaunt through vintage print advertisements over the years.” ~Houston Chronicle

“…wonderfully large-scale ode to Frye…The vintage clips and ads are one of the most fascinating components of this densely packed volume. The latter, particularly, offer a great visual history of America. But for someone who didn’t inherit any 1970’s Fryes from her mom or aunts, the book’s most alluring feature may simply be the abundance of up-close images of boots old and new that detail rugged hardware, finely stacked heels and naturally antiqued leather.” ~Stylecourt.com
or
Not Currently Available for Direct Purchase
Copyright © 2020 American Booksellers Association