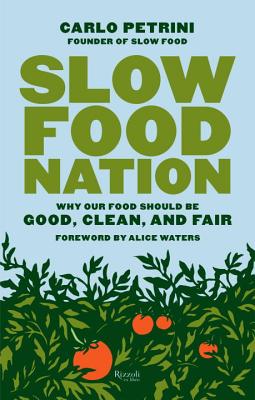 Why our Food Should be Good, Clean, and Fair

By now most of us are aware of the threats looming in the food world. The best-selling Fast Food Nation and other recent books have alerted us to such dangers as genetically modified organisms, food-borne diseases, and industrial farming. Now it is time for answers, and Slow Food Nation steps up to the challenge. Here the charismatic leader of the Slow Food movement, Carlo Petrini, outlines many different routes by which we may take back control of our food. The three central principles of the Slow Food plan are these: food must be sustainably produced in ways that are sensitive to the environment, those who produce the food must be fairly treated, and the food must be healthful and delicious. In his travels around the world as ambassador for Slow Food, Petrini has witnessed firsthand the many ways that native peoples are feeding themselves without making use of the harmful methods of the industrial complex. He relates the wisdom to be gleaned from local cultures in such varied places as Mongolia, Chiapas, Sri Lanka, and Puglia. Amidst our crisis, it is critical that Americans look for insight from other cultures around the world and begin to build a new and better way of eating in our communities here.

Praise For Slow Food Nation: Why our Food Should be Good, Clean, and Fair…

“Petrini builds his case against fast food and offers ways to bring back the balance between nature and our table.” ~Bon Appetit

“The book is an earthly, through treatise on eating well.” ~Whole Living

“In Slow Food Nation, Petrini demonstrates the ultimate mission of the Slow Food Movement by exposing the dangers of the food industry, which include genetically modified organisms, chemicals, and pesticides.” ~WholeFoods Magazine

Carlo Petrini is the founder and driving force of Slow Food and was recently acclaimed as a great innovator in Time magazine's list of "European Heroes." In May 2016, the United Nations named him "FAO Special Ambassador Zero Hunger for Europe."
Loading...
or
Not Currently Available for Direct Purchase