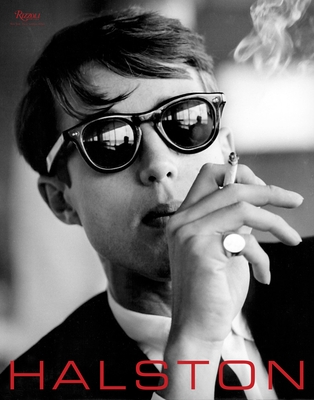 Written by Halston’s niece and confidante, this is the first monograph to chronicle the designer’s life and his glamorous, minimalist aesthetic that personified American fashion in the electric 1970s. After rising in the fashion world from his beginnings as a milliner for Bergdorf Goodman, Roy Halston Frowick (1932–1990) launched his eponymous womenswear label in 1968, buoyed by his connections with socialites and celebrities. As the creator of Jackie Kennedy’s signature pillbox hat and as Liza Minnelli’s fashion guru throughout the 1970s and ’80s, Halston was synonymous both with American style’s modern, glamorous look and an A-list clientele. The Halston look continues to be revered today as a marker of American fashion at its peak. This book chronicles the ultrachic Halston’s journey from his homespun roots to the acme of urban fame, illustrated through the lens of the author’s personal archives and early sketches, as well as unseen Joe Eula and Stephen Sprouse drawings. His story unfolds through the author’s interviews with Jane Holzer, Marisa Berenson, Joel Schumacher, and Jeffrey Bilhuber, among others, all of whose personal narratives are essential to Halston’s enduring legacy. Spotlighting his most important design achievements and his collaborations with luminaries such as Martha Graham, Elsa Peretti, and Hiro, this book presents to readers the untold story of Halston and solidifies hisplace as a key designer in American fashion.

“Written by Halston’s niece and confidante, the pages reflect his glamorous, minimalist aesthetic that personified American fashion in the electric 1970s.” –Society Diaries

“Without question Lesley Frowick has written an endearing and intimate telling of her beloved uncle, Roy Halston Frowick…telling of his life is a love letter and paean to his legacy…The best way to summarize this book is to say that Ms. Frowick has approached the life of this designer as a sentimental journey. What sets the book apart is that she concentrates on Halston’s relationships to his actual family as well his extended family…it is full of photos and provides a great timeline for the designer’s career…” –New York Journal of Books

Lesley Frowick, one of Halston’s six nieces, is a photographer and the cocurator of Halston and Warhol: Silver and Suede at the Warhol Museum, Pittsburgh (May 2014). Liza Minnelli is one of the most versatile, highly regarded, and best-selling entertainers in television and stage history. Halston created Liza’s most unforgettable and iconic costumes for many of her performances. She continues to wear his fashions today.
Loading...
or
Not Currently Available for Direct Purchase