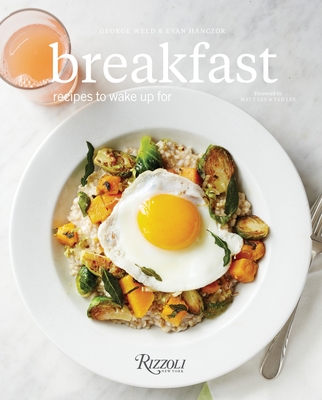 Recipes to Wake Up For

A delicious ode to morning foods, featuring eggs, biscuits, meats, and pancakes you’ll want to start every day with. Breakfast brings beauty and enthusiasm to the morning meal. George Weld draws on his passion and Southern roots to create the fresh, satisfying dishes his Williamsburg restaurant, Egg, has been serving for ten years. Breakfast begins with simple techniques that transform familiar ingredients into transcendent meals. A pantry section shows the ingredients to have on hand for whipping up delicious morning meals. Following are recipes for eggs (including the restaurant’s signature Eggs Rothko), grains, meats, produce, sauces and syrups, juices, and pastries. Among the beloved recipes from Egg’s kitchen are dishes adapted for meals at any hour, such as salads with eggs and smoked fish, fried chicken and biscuits, and toast with greens. Running through the book are contributions from farmers, fishermen, and athletes on the nourishing meals they fuel themselves with in the morning. Accompanied by images from Weld’s own farm (which supplies Egg with many of its ingredients), this book will make breakfast the meal you dream about at night, and the most anticipated part of your morning.

Praise For Breakfast: Recipes to Wake Up For…

"These days, George Weld and Evan Hanczor, the farmer/restaurateur and chef behind Willamsburg’s Egg eatery, are serving up more than just scrumptious concoctions like Eggs Rothko or Grafton cheddar omelets with broiled tomatoes. Authors of the newly released Breakfast, they are now offering menus and ideas. The book, they say, 'is our best argument for waking up and making something delicious for breakfast.' And what better way to start the day than at Egg, or with one?" -Vogue

"Evan Hanczor landed in New York with many passions but no plan. . . .  Five years later, Hanczor has found success precisely by merging his work as a chef with his interests in writing and policy." - Huffington Post

"George Weld opened Egg in Williamsburg, Brooklyn, 10 years ago, and since then it’s become another sort of Sunday-morning place of worship, if you feel the same longing for waffles as, say, Leslie Knope does. And have you heard the good news? Now you can remain in your pajamas and have the Egg experience at home, because its cookbook, Breakfast: Recipes to Wake Up For, is coming out next week. Trust me, after this Bloody, you’ll definitely feel risen." -VanityFair.com

"Over the weekend, George Weld and Evan Hanczor, the duo behind Williamsburg’s Egg restaurant, did what they do best: share the art of breakfast with perfect strangers in Brooklyn. They set up a very Southern hash bar at Smorgasburg flea market, and showcased recipes from their week-old cookbook, Breakfast: Recipes to Wake Up For (Rizzoli), at the annual Food Book Fair." -New York Times Magazine

"We know what you're thinking: Is it really that hard to scramble an egg? But once you've had a taste of the scrambled eggs from Egg Restaurant in Brooklyn, you know: There are scrambled eggs, and then there are life-changing scrambled eggs. The latter is a piece of custardy heaven—and without the addition of any milk or heavy cream. So we got Evan Hanczor, one of the chefs at the restaurant and coauthor of the just-released cookbook Breakfast: Recipes to Wake Up For, to share his secret technique." -Women's Health Magazine

"Owner George Weld and Chef Evan Hanczor of Williamsburg's Egg (109 N. 3rd St.) -- notorious for weekend lines and their ridiculously yummy Southern dishes -- debuted Breakfast: Recipes to Wake up For this week, with 200 pages of reasons for New Yorkers to slow down and enjoy their morning meal." -AM New York

"Like Egg, Breakfast doesn't attempt to shock or surprise. The focus is on combining smart techniques with simple ingredients to create the kind of morning meals that will make you actually want to get out of bed." -TastingTable.com

"Breakfast: Recipes to Wake Up For includes the restaurant's morning standbys like Eggs Rothko, a twist on an egg-in-toast that includes an insulation of melted cheddar, along with lesser-known hits (perfect fried chicken, for example) and sage advice like, 'If you learn to cook eggs properly, you will be a better human being.' It's a simple, beautiful book that embodies everything great about this quirky little restaurant that's improbably navigated Williamsburg's transformation from affordable artist refuge to major tourist destination." -Food & Wine

"Brooklyn chef George Weld knows breakfast. Not only did he open a restaurant ten years ago devoted to the most important meal of the day, he has just released a cookbook on the subject. Breakfast: Recipes to Wake Up For is not the hipster brunch manual you might expect from a guy who owns a Williamsburg restaurant called Egg, though." -Epicurious.com

"Judging by the popularity of George Weld‘s Brooklyn breakfast joint, Egg, I’m not the only [hungry] morning person around. In the book’s foreword ('In Defense of Morning'), Weld lists many of the oppositions people pose to eating more than cold cereal in the morning – and then shoots them full of holes. The ensuing recipes shore up his argument in the most delicious way." -Cookbook365.com

"Waned in Virginia and the Carolinas, and a PHD in Literature, no wonder [co-author] George’s Southern affect on Williamsburg’s morning drawl, eventually lead to a cookbook, Breakfast: Recipe To Wake Up For.” -Heritage Radio Network

George Weld opened Egg in Williamsburg, Brooklyn, in 2005 and operates Goatfell Farm in New York’s Hudson Valley. Weld is also a contributor to Edible magazine. Matt Lee and Ted Lee are coproprietors of The Lee Bros. Boiled Peanuts Catalogue, based in Charleston, SC. They have written about food, wine, and travel for numerous magazines and newspapers, and their three cookbooks about the South have won a combined six James Beard Foundation and IACP Cookbook Awards.
Loading...
or
Not Currently Available for Direct Purchase