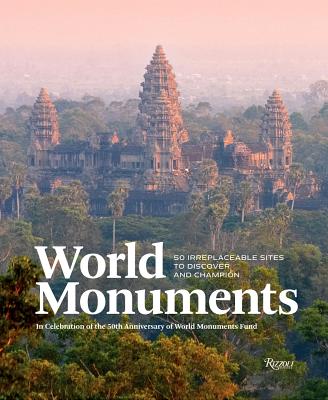 A stunning tour of 50 of the world’s most extraordinary destinations selected from the World Monuments Fund’s most important sites of global heritage. ﻿In commemoration of its 50th anniversary, the World Monuments Fund has commissioned some of today’s most important writers to give voice to the organization’s work around the world over the past 50 years. Curated by the International Center of Photography, the book features striking images from renowned photographers, including Edward Burtynsky, Tiina Itkonen, Erich Lessing, Gideon Mendel, and Sebastião Salgado.
In essence, this is a bucket list for the educated traveler—armchair or otherwise. From Venice and Petra to New Orleans and Angkor, Easter Island to the Tempel Synagogue in Kraków, Poland, to the Mughal Gardens of Agra, India, to the Chancellerie d’Orléans in Paris, World Monuments presents 50 of the world’s most compelling destinations, cultural heritage sites, and significant architectural works that must be seen and preserved.

World Monuments Fund is the world’s premier nongovernmental organization that protects against the loss of the world’s architectural and cultural heritage, comprising the built environment, the artworks that embellish it, and the cultural traditions that it sustains. Since 1965, it has successfully completed approximately 600 projects in almost 100 countries around the world.

“Published to celebrate the 50th anniversary of the World Monuments Fund, World Monuments is a lavish new coffee table book that highlights 50 historic sites alongside compelling essays by eight experts...from Angkor to Yaxchilan. Each chapter begins with an essay by a leading scholar. John Julius Norwich covers the effects of natural catastrophe and climate change on Venice while Anne Applebaum uses the remaining Jewish synagogues in Krakow as a framework for discussing intentional damage at the hands of war and human conflict. Other essays by luminaries including William Dalrymple and Andre Aciman address additional concerns by focusing on sites in Rome, Cairo, Agra, Cusco, Mexico City and Beijing. World Monuments complements the thoughtful essays with informative summaries and splendid photographs that get at the heart of each historic site. While the book’s primary focus is on the importance of historic preservation efforts, it also inspires as a ‘bucket list’ for the educated traveler—armchair or otherwise.”
--Longitude, Recommended Reading for Travelers

"No mere coffee table book, [World Monument's] pages are filled with though-provoking essays by some of the world's prominent writers . . . In essence, the book is an armchair bucket list for the educated traveler. From Petra to new Orleans and Angkor to the Tempel Synagogue in Krakow, the Mughal Gardens of Agra, India to the Changellerie d'Orleans in Paris, it offers 50 of the world's more compelling destinations, cultural heritage sites and significant architectural works."
-ARCHITECTS & ARTISANS