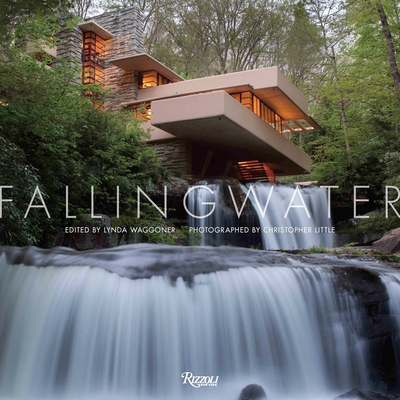 This seminal volume, now back in print in a new format and at a reduced price, offers a deeply immersive tour of Frank Lloyd Wright’s most legendary building. A landmark volume to commemorate what is arguably the most significant private residence of the twentieth century. With stunning photography commissioned especially for the book, Fallingwater captures the much-loved masterpiece by legendary architect Frank Lloyd Wright. The book includes authoritative texts on Fallingwater’s history, structure, restoration, and collections, including the house’s relationship to its setting and its importance to the sustainability movement; its meaning in the context of Wright’s body of work; the analysis and planning process that went into Fallingwater’s restoration and how a seemingly unsolvable problem was overcome through modern engineering. The book is a tribute to the genius behind this masterwork.

Lynda Waggoner is the director of Fallingwater and the vice president of the Western Pennsylvania Conservancy. She is the author of Fallingwater: Frank Lloyd Wright’s Romance with Nature, among other publications.

Christopher Little is a widely published and much acclaimed photographer whose work was featured in the seminal volume Fallingwater (1986) by Edgar Kaufmann, Jr.

David G. De Long is professor emeritus at the University of Pennsylvania and the author of numerous volumes on architecture.

Rick Darke is a photographer and horticulturist, and an award-winning author of books such as The American Woodland Garden.

Justin Gunther is the curator of Buildings and Collections at Fallingwater.

Neil Levine is the Emmet Blakeney Gleason Professor of History of Art and Architecture at Harvard and the author of The Architecture of Frank Lloyd Wright.

John Reynolds is associate professor of architecture at Miami University of Ohio.

Robert Silman is the president of Robert Silman Associates and a noted structural engineer who directed the strengthening of Fallingwater in 2002.

“Editor Lynda Waggoner and photographer Christopher Little have produced a remarkable tribute to one of Wright’s signature works on the 75th anniversary of the 1936 groundbreaking (construction took three years).” ~Wall Street Journal

“The book includes her introduction, as well as a great deal of new information, including correspondence between Wright and Kaufman never published before.” ~Architects and Artisans

"Both informative and aesthetically pleasing, this definitive work will be well appreciated..." ~Publishers Weekly

“…the book brings to the foreground the emotional experience that a visitor can extract from visiting this exceptional place.” ~Archinovations

"Thanks to Fallingwater, a new book of essays and sumptuous photographs edited by Fallingwater's director, Lynda Waggoner, you can take an engrossing armchair tour. Those cantilevered decks still inspire..." ~Houseplans.com
or support indie stores by buying on
Copyright © 2020 American Booksellers Association