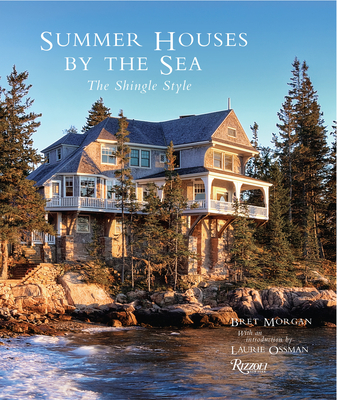 Summer Houses by the Sea

Romantic seaside houses in the beloved Shingle Style, from Maine to Montauk.

This book will delight and inspire readers with its luxurious treatment of homes in this beloved architectural style, which has become an expression of the romantic longing for a life by the sea. Featuring all-new photography taken especially for the book, it looks at both the historic and new Shingle Style houses.

The Shingle Style is one of the few purely American genres of architecture and was closely linked to the Aesthetic and the Arts and Crafts movements. Prominent architects, including H. H. Richardson, William Ralph Emerson, and Frank Lloyd Wright, were influenced by the style and contributed to its milieu. Architects and architectural movements, including postmodernism, have continued to be influenced by this style. This volume begins with a well-documented history and then considers some of the more exemplary houses of the style in its original and modern manifestations. Some of the more notable homes featured are McKim, Mead & White’s Ochre Point in Newport, Rhode Island, the Quackenbush House in East Hampton, and Grey Gardens, the famously ramshackle residence of Edith Bouvier Beale and her daughter “Little Edie”—the eccentric aunt and first cousin of Jacqueline Kennedy Onassis—, as well as contemporary manifestations of the style, such as the Robert A.M. Stern–designed Chilmark Residence, in Martha’s Vineyard, and Shope Reno Wharton’s Black Watch, in Jamestown, Rhode Island.

Praise For Summer Houses by the Sea: The Shingle Style…

"Just in time for summer Rizzoli has a new, soon-to-be-released book about the ubiquitous beach house: Summer Houses by the Sea: The Shingle Style by Bret Morgan." —ARCHITECT DESIGN

Bret Morgan is a widely published photographer of architecture and interiors, gardens and landscapes. His books for Rizzoli include Rustic: Country Houses, Rural Dwellings, Wooded Retreats and Historic Houses of the Hudson River Valley.
Loading...
or support indie stores by buying on
(This book is on backorder)