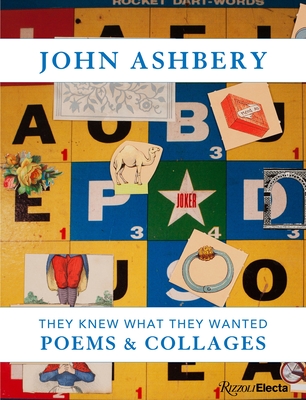 They Knew What They Wanted: Collages and Poems

Widely considered the most important poet in America today, John Ashbery creates collage both in his poetry and as visual art. This beautiful volume features Ashbery’s collage work in both media.

John Ashbery is known foremost as a poet, but he has been creating collages for nearly as long as he’s been writing poetry. He began working in the medium when he was an undergraduate at Harvard, more than seventy years ago. Now, for the first time ever, this volume compiles a comprehensive selection of Ashbery’s collage work, accompanied by a selection of collage-related poems. Like his poetry, Ashbery’s collage work combines art historical and pop culture references, creating often humorous juxtapositions.

Ashbery’s approach to poetry and collage is quite similar and here, in an extensive interview with poet, critic, and longtime friend John Yau, Ashbery delves into his creative process and the parallels between creating in the two media.

The subtitle They Knew What They Wanted is taken from one of Ashbery’s collage-poems, which is featured in this volume along with many others. With about seventy-five collages, exploring how Ashbery’s visual art has evolved over the years, this book is a must-have for the many lovers of Ashbery’s poetry, and for all those wishing to learn more about his creative output.

Praise For John Ashbery: They Knew What They Wanted: Collages and Poems…

Ashbery is ever alert to the natural ironies that arise from juxtaposition, highlighting conflicting visions of the world as depicted in newspapers, magazines, classical paintings, and other sources. This book, which also features an intimate interview between Ashbery and the poet and art critic John Yau, is an enlightening complement to Ashbery's poetry.
—Publishers Weekly


"Ashberry's images demonstrate the same sense of gleeful mischeif thats everywhere in his poetry, mixing fine art with advertising and comic strips and picture postcards, all of it married with the artists sure eye for colour and moood and perspective"
—New York Times Book Review

John Ashbery is recognized as one of the greatest American poets of the twentieth century. He has won numerous poetry awards, including the Pulitzer Prize, the National Book Award, among others, and a MacArthur “Genius” Grant. Mark Polizzotti is a writer, translator, and publisher. John Yau is a poet, art critic, and curator. He has published more than fifty books of poetry, fiction, and art criticism.
Loading...
or
Not Currently Available for Direct Purchase