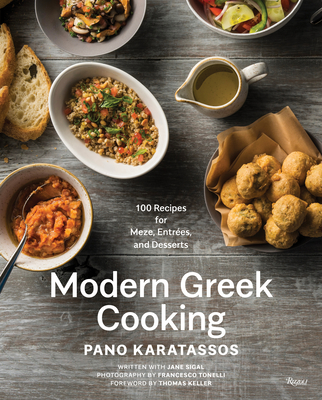 100 Recipes for Meze, Entrées, and Desserts

Moving beyond familiar rustic, old-fashioned Greek fare are the delicious and unique offerings of premier chef, Pano Karatassos, tailored for the home cook.

These 100 best-loved recipes served at Chef Pano’s award-winning Atlanta restaurant, Kyma, showcase his inspiration: paying homage to the flavors and traditions of Greece, and to the wealth of insight about Greek cooking passed down from his grandmother; his classical French training, and even a touch of his Southern roots.

"Pano Karatossos, Sr., is one of America’s greatest restaurateurs and practically put Atlanta on the gastro-map with his restaurants, which includes the wonderful Kyma, where his son, Pano, Jr., oversees the kitchen. From that long-lived respect for Greek cookery comes the latter Pano’s excellent new cookbook that goes way beyond the clichés of Greek food as found in America." —Forbes

"Flipping through the pages of Pano Karatassos's Modern Greek Cooking: 100 Recipes for Meze, Entrées, and Desserts...will make you feel like you're about to jet-set to Greece. It's packed with old-fashioned Greek recipes that are home-cook friendly." —Popsugar

Chef Pano Karatassos is the executive chef of Kyma, the country’s most celebrated Greek seafood restaurant. He studied at the Culinary Institute of America and trained under world-renowned chefs Thomas Keller, Jean-Georges Vongerichten, and Eric Ripert. Kyma was named one ofthe 20 best restaurants in the country by Esquire magazine. He is a member of the prestigious Culinary Institute of America Society of Fellows. Francesco Tonelli is a world-class food photographer whose images grace some of the best-selling cookbooks in the U.S.
Loading...
or
Not Currently Available for Direct Purchase