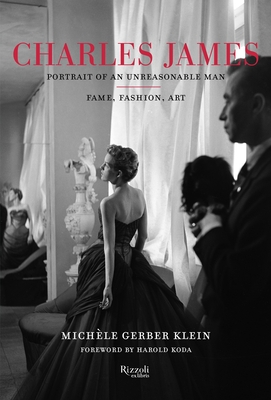 Inspired by the discovery of long-overlooked interviews conducted just before his death, this is the first biography of the visionary fashion designer Charles James.

Christian Dior described him as the inspiration for the “New Look.” Salvador Dalí called his work “soft sculpture,” and Virginia Woolf exclaimed, “He is a genius.”

As George Bernard Shaw tells us, only unreasonable men change the world. This portrait of the life and times of Charles James—winner of two Coty awards, and the subject of a 2014 Metropolitan Museum of Art show—draws on the glamour of Europe in the 1930s, and the dazzle of New York City from the ’40s through the ’70s as it travels with James from his birth to privilege in England in 1906 and follows his career through his complex and turbulent relationships with exceptional women such as Elsa Schiaparelli and Eleanor Lambert, ending with his penurious death in New York’s fabled Chelsea Hotel.

As engrossing as a novel, as dramatic as grand opera, James’s story will provoke, rivet, and inspire.

"A luscious exposé of a game-changing designer who revolutionized the fashion industry. In her debut biography, Klein, the founder of joan vass USA, introduces readers to Charles James (1906-1978), the notoriously fabulous British-born fashion designer who sought to incorporate countless areas of study into the art of fashion. Self-described as "a legend because my work is too little known," James started making waves in the fashion industry in the 1930s. "There were never more than a handful of Charles James matrix designs," writes the author. "But each one is a masterpiece, developed with painstaking care and slowness, and so beautifully calibrated that one small change could throw everything off balance." This close attention to pristine detail is what set James apart from the other aspiring designers. More specifically, it was due to his wild imagination for new ways of stitching fabric together and his wide social network. Klein organizes the chapters according to specific people who influenced James or with whom James went into business, drew inspiration from, or loved. Interestingly, Klein pushes the biographical genre by writing about her subject through the stories of those who surrounded him. "
—Kirkus Reviews

"James seems to have met, befriended, loved, or reviled most of the 20th century's great fashion and style makers, from Paul Poiret to Antonio Lopez, and this book is a who's who of those glittering, fascinating characters. The impossible Mr. James emerges as one of the most compelling of them all."
—Hamish Bowles, Vogue.com

"Peppered with society drama, his patrician connections, and the financial and personal pitfalls that haunted him, she also memorializes the remarkable women that inspired the creative genius of James. The author draws on close to 40 hours of interviews—filmed by Anton Perich, with R. Couri Hay and James in 1977—shortly before his death."
—Jeena Sharma, Interview Magazine

"I loved this book, and could not help but admire the man’s exquisite if sometimes detrimental resistance to compromise, right to the end."
—Denis Ferrara, New York Social Diary

The founder of joan vass U.S.A. and vice president of the Liberman Foundation, Michèle Gerber Klein has written about art and fashion for many publications and has served on several boards including the Dia Art Foundation and the Cooper Hewitt Smithsonian Design Museum.
Loading...
or
Not Currently Available for Direct Purchase