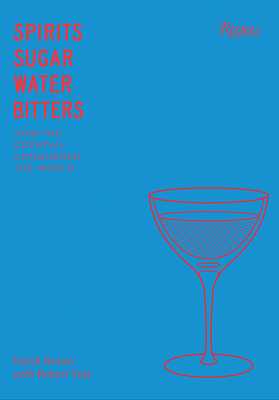 How the Cocktail Conquered the World

The story of the cocktail --"the only American invention as perfect as the sonnet," according to H.L. Mencken --featuring 45 recipes for rediscovered classics and inspired originals.

A cocktail-- the fascinating alchemy of simple alcohols into complex potables-- is an invention as unlikely as it is delicious, and an American innovation whose history marches in step with that of the Republic. In Spirits Sugar Water Bitters, nationally recognized bartender and spirits expert Derek Brown tells the story of the cocktail's birth, rise, fall, and eventual resurrection, tracing the contours of the American story itself.

In this spirited timeline, Brown shows how events such as the Whiskey Rebellion, Prohibition, and the entry of Hawaii into the United States shaped the nation's drinking habits. Brown also tells the stories of the great men and women who made their mark on cocktail culture, including America's Distiller-In-Chief George Washington and modern-day King Cocktail Dale DeGroff, as well as lesser-known mixology heroes like Martha Niblo, the nineteenth-century New York proprietress famous for her Sherry Cobblers, and Frederic Tudor, whose ice-shipping business gave early drinks like the Cobbler and the Mint Julep the chill they needed. Featuring classic and original recipes inspired by each period, this book serves up the perfect mix of geography, history, culture, and taste.

Derek Brown is a leading spirits and cocktail expert and president of Drink Company, which owns and operates 2017 Spirited Award winning "Best American Cocktail Bar" Columbia Room, as well as PUB, a rotating pop-up bar that's housed the wildly-popular "Miracle on 7th Street", "Cherry Blossom PUB," and "Game of Thrones PUB." His work has earned several James Beard Award nominations, and has been named Imbibe Magazine's Bartender of the Year. He has also served as Chief Spirits Advisor for the National Archives. Brown's writing on spirits has appeared in The Atlantic, The Washington Post, and other publications. Playboy magazine named him as one of "The 10 Entertainers, Thought Leaders and Heroes Who'll Save Us in 2017."

Robert Yule is a freelance journalist and writer, with an expertise in American history and travel. He is vice president of the creative content agency, Long Story Short and author of the blog Historic District.