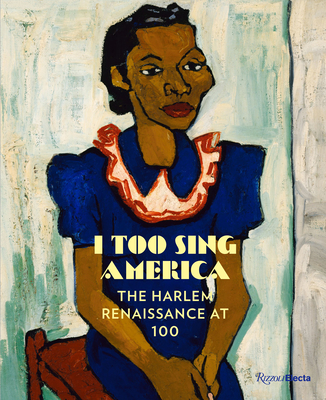 I Too Sing America (Hardcover)

The Harlem Renaissance at 100

Winner of the James A. Porter and David C. Driskell Book Award for African American Art History, I Too Sing America offers a major survey on the visual art and material culture of the groundbreaking movement one hundred years after the Harlem Renaissance emerged as a creative force at the close of World War I.

It illuminates multiple facets of the era--the lives of its people, the art, the literature, the music, and the social history--through paintings, prints, photography, sculpture, and contemporary documents and ephemera. The lushly illustrated chronicle includes work by cherished artists such as Romare Bearden, Allan Rohan Crite, Palmer Hayden, William Johnson, Jacob Lawrence, Archibald Motley, and James Van Der Zee.
The project is the culmination of decades of reflection, research, and scholarship by Wil Haygood, acclaimed biographer and preeminent historian on Harlem and its cultural roots. In thematic chapters, the author captures the range and breadth of the Harlem Reniassance, a sweeping movement which saw an astonishing array of black writers and artists and musicians gather over a period of a few intense years, expanding far beyond its roots in Harlem to unleashing a myriad of talents upon the nation. The book is published in conjunction with a major exhibition at the Columbus Museum of Art.

Wil Haygood, guest curator for the Columbus Museum of Art's I Too Sing America: Harlem Renaissance at 100, is a Guggenheim and National Endowment for the Humanities Fellow. Haygood has written 4 biographies of major Harlem figures who were all touched by the Harlem Renaissance. His King of the Cats: The Life and Times of Adam Clayton Powell, Jr., was a New York Times Notable Book of the Year. In Black and White: The Life of Sammy Davis, Jr., won the Richard Wright-Zora Neale Hurston Literary Award, the Deems Taylor Biography Award, and the Non-Fiction Book of the Year Award from the Black Caucus of the ALA His Sweet Thunder: The Life and Times of Sugar Ray Robinson, was a PEN/ESPN Book Award Finalist. Showdown: Thurgood Marshall and the Supreme Court Nomination that Changed America received the Scribes Book Award, the Ohioana Book Award, and the Honor Book Award from the Black Caucus of the ALA.
At the Columbus Museum of Art, Carole Genshaft is Curator at Large, Anastasia Kinigopoulo is Assistant Curator, Nannette V. Maciejunes is the Executive Director, Drew Sawyer is Head of Exhibitions and William J. and Sarah Ross Soter Associate Curator of Photography,

Praise For I Too Sing America: The Harlem Renaissance at 100…

"One measure of an exhibition catalogue’s quality is the degree to which it makes you want to go see the exhibition. In the case of this volume, let us just say that, since picking it up, I have been wracked with pain that I have not been able to visit the Columbus Museum of Art to catch the show it accompanies, which runs through January 20. It is a sumptuously illustrated tome, with reproductions of pieces, variously iconic and little-known, by Palmer Hayden, Loïs Mailou Jones, Jacob Lawrence, Augusta Savage, Horace Pippin, and many, many more. Haygood is a biographer and journalist (famed for writing the story that became the film The Butler), and he’s accomplished the rare feat of weaving together rich scholarship with luminous prose. Including contributions from a variety of experts, it takes an expansive view of its subject, looking not only at visual art but vernacular photography, writing, and periodicals of the movement. 'The Harlem Renaissance lives,' Haygood writes. 'It sings. It continues to do its part to explain America to itself, and also to the world.' This book is a superb vehicle for that remarkable story. —Andrew Russeth

"Celebrating the centennial of the creative and intellectual flowering, “I Too Sing America” is a unique exploration of the subject that brings a journalist together with his hometown museum and the community where he grew up in Columbus, Ohio... Titled after Langston Hughes’s iconic poem, “I Too Sing America” considers the Harlem Renaissance “as a movement not confined to either upper Manhattan or the interwar period, but as a historical moment of national and international significance that continues to have reverberations far beyond its typically noted end date in the mid-1930s.” The catalog is a wonderful volume lavishly illustrated with the art and photography that defined the Renaissance. Haygood’s essays on how Harlem emerged as the mecca of Black America, the feverish publishing the period sparked, the dance, theater, and music the era engendered, the two Reverend Powells, and W.E.B. Du Bois, Langston Hughes, and Zora Neale Hurston, appear throughout the volume. His contributions are punctuated by writings about individual visual artists, including Malvin Gray Johnson, Winold Reiss, Aaron Douglas, Palmer Hayden, Augusta Savage, and James VanDerZee, authored by the museum’s curators." —Culture Type
or
Buy Here
Copyright © 2020 American Booksellers Association