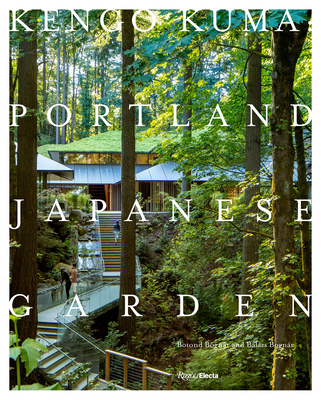 A detailed examination of the beautiful and sensitively realized addition to the famed Portland Japanese Garden by contemporary Japanese architect Kengo Kuma.

Kengo Kuma: Portland Japanese Garden introduces the star Japanese architect's first public project in the United States. Kuma won the Portland Japanese Garden invitational competition by proposing a design that, while executed with contemporary materials and the latest construction technology, also builds on the principles of traditional architecture and craftsmanship. The resulting group of small buildings superbly blends with its magnificent natural environment and provides an outstanding example of Kuma's artistry of seamlessly connecting nature and architecture as well as past and present without falling into the trap of mimicry or sentimentality.

The book includes chapters on the reverence of nature and Japanese culture, on architecture and gardens in Japan, on the architecture of Kengo Kuma beyond the garden, and on craftsmanship and design, as well as on the new buildings and the garden itself, which is widely considered the most beautiful such garden outside Japan.

Botond Bognar is Professor and Edgar A. Tafel Endowed Chair in Architecture at the University of Illinois Urbana-Champaign. Professor Bognar is an internationally renowned scholar of the history and theories of contemporary Japanese architecture and urbanism. He has written some twenty books and monographs, more than thirty chapters to books, and many essays and articles in professional journals. He is the recipient of several distinguished awards and recognitions including an Arnold O. Beckman Fellowship, a Japan Foundation Fellowship, the Architectural Institute of Japan (AIJ) Cultural Appreciation Prize, and many others.

Balázs Bognár is an architect and partner at Kengo Kuma & Associates in Tokyo, Japan, and served as project architect for the "cultural crossing" at the Portland Japanese Garden.

Kengo Kuma is a celebrated Japanese architect and principal of Kengo Kuma and Associates. He is a professor at the Graduate School of Architecture at the University of Tokyo.