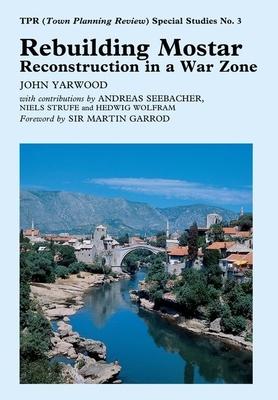 Following the devastation of the war in Bosnia, the European Union formed the European Union Administration of Mostar (EUAM) and John Yarwood - a widely experienced architect, town planner and project manager - worked as Director of Reconstruction for EUAM for the whole of the period of its mandate, from 1994 to 1996. On behalf of the international community, the EU formed a city administration in Mostar with the goal of reconciling the former warring parties; building security and creating a unified police force; establishing freedom of movement; holding democratic elections; and establishing a City Council. It also spent DM170 million on repairing 6000 houses, 30 public buildings, 25 schools, 18 health buildings, 70 water projects, 5 bridges, a construction equipment pool and a technical training centre. Ninety buildings were de-mined and an urban planning system was established. This was a project of unique historical significance from many points of view. In a book extensively illustrated with photographs and plans, Yarwood and his collaborators describe reconstruction from a general technical standpoint. The book shows what was done; explains how it was done; and considers the problems, issues, failures and successes. It analyses what lessons were learned and points out the relevance for similar future projects. The analysis is firmly grounded in the context of Bosnian and European politics.

John Yarwood is an International Planning Consultant. He is a Former Director of Urban Institute Ireland at University College Dublin.
or
Not Currently Available for Direct Purchase
Copyright © 2020 American Booksellers Association