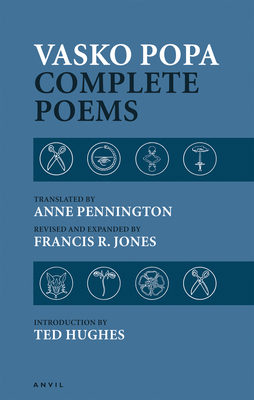 Vasko Popa is one of the great post-war European poets. From surrealist fable to traditional folk-tale, from personal anecdote to tribal myth, Popa’s poetry embodies in an original form the most profound imaginative truths of our age, precisely located in the reality and history of Serbia, in the heart of Central Europe. His Complete Poems is an essential work of our time.

Vasko Popa: Vasko Popa (1922-1991), Serbia's greatest modern poet, was born in the Banat district of Yugoslavia. He was elected to the Serbian Academy of Arts and Sciences in 1972 and to the Parisian Académie Mallarmé in 1977. He visited Britain on several occasions, attending the London Poetry International and Cambridge Poetry Festivals.
Anne Pennington: Anne Pennington (1934-1981) was a Fellow of Lady Margaret Hall, Oxford where she held the Chair of Comparative Slavonic Philology. Her other translations include Marko the Prince: Serbo-Croat heroic songs (in collaboration with Peter Levi) and Popa's selection of folk poetry, The Golden Apple (with Andrew Harvey).

Francis R. Jones: Francis R. Jones (b. 1955) lectures in English as a foreign language at the University of Newcastle. His other translations include the Dutch poet Hans Faverey's Against the Forgetting (Anvil, 1995) and several collections of poems by the Serbian poet, Ivan V. Lalic. He has twice been awarded the Poetry Society’s European Poetry Translation Prize.
Ted Hughes: The late Ted Hughes was England's greatest poet of the second half of the twentieth century. He was a passionate advocate of translated poetry and did much to promote central and eastern European poets in translation.
or support indie stores by buying on
(This book is on backorder)
Copyright © 2020 American Booksellers Association