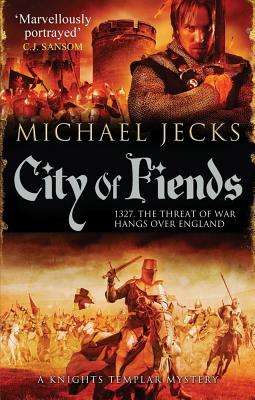 It's 1327 and England is in turmoil. King Edward II has been removed from the throne and his son installed in his place. The old man's rule had proved a disaster for the realm and many hope that his removal may mean the return of peace to England's cities.

Keeper of the King's Peace Sir Baldwin de Furnshill and his friend Bailiff Simon Puttock had been tasked with guarding Edward II, but they have failed in their task and now ride fast to Exeter to inform the sheriff of the old king's escape.

In Exeter, the sheriff has problems of his own. Overnight the body of a young maid has been discovered, lying bloodied and abandoned in a dirty alleyway. The city's gates had been shut against the lawlessness outside, so the perpetrator must still lie within the sanctuary of the town.

When Baldwin de Furnshill arrives, along with Sir Richard de Welles, a companion of old, he is tasked with uncovering the truth behind this gruesome murder. But, in a city where every man hides a secret, his task will be far from easy…

Michael Jecks gave up a career in the computer industry to concentrate on writing and the study of medieval history. A regular speaker at library and literary events, he is a past Chairman of the Crime Writers' Association. He lives with his wife, children, and dogs in northern Dartmoor.
Loading...
or
Not Currently Available for Direct Purchase