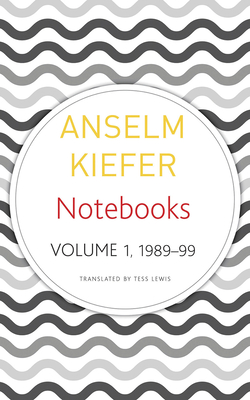 “For a long time, it was not clear if I would become a writer or an artist,” says Anselm Kiefer, whose paintings and sculptures have made him one of the most significant and influential artists of our time. Since he was awarded the Peace Prize by the German Book Trade in 2008, his essays, speeches, and lectures have gradually received more attention, but until now his diary accounts have been almost completely unknown. The power in Kiefer’s images, however, is rivaled by his writings on nature and history, literature and antiquity, and mysticism and mythology.

The first volume of Notebooks spans the years 1998-1999 and traces the origins and creative process of Kiefer’s visual works during this period. In this volume, Kiefer returns constantly to his touchstones: sixteenth-century alchemist Robert Fludd, German romantic poet Novalis, Martin Heidegger, Ingeborg Bachmann, Robert Musil, and many other writers and thinkers. The entries reveal the process by which his artworks are informed by his reading—and vice versa—and track the development of the works he created in the late 1990s. Translated into English for the first time by Tess Lewis, the diaries reveal Kiefer’s strong affinity for language and let readers witness the process of thoughts, experiences, and adventures slowly transcending the limits of art, achieving meaning in and beyond their medium.

“His works recall, in this sense, the grand tradition of history painting, with its notion about the elevated role of art in society, except that they do not presume moral certainty. What makes Kiefer’s work so convincing . . . is precisely its ambiguity and self-doubt, its rejection of easy solutions, historical amnesia, and transcendence.”—New York Times

“Wordiness for Kiefer is painterliness. The library and the gallery, the book and the frame inseparable, even interchangeable, in his monumental archive of human memory. Not since Picasso’s Guernica have pictures demanded so urgently that we studiously reflect and recollect in their presence.”—Simon Schama

Anselm Kiefer is a painter, sculptor, and installation artist living and working in France. His works have been exhibited at MoMA, the San Francisco Museum of Art, the Guggenheim, and the Louvre, among many others.

“Notebooks chronicle a rich and wonderful wellspring of textual praxis embracing the cultivation and sustenance inherent to enduring creative processes. . . . We as reader and viewers gain immense insight into forging artistic identity thanks to his zeal and perseverance. These Notebooks are a gift.”
— Los Angeles Review of Books
or
Not Currently Available for Direct Purchase
Copyright © 2020 American Booksellers Association