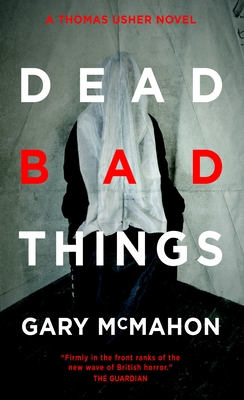 HE SOUGHT TO FLEE HIS TRAGIC PAST, but when Thomas Usher hears a clockwork voice on the phone, and sees ever-more disturbing visions in a derelict warehouse, Usher realizes that he has to return home - for the sake of his own sanity.

Meanwhile, a deadly figure from Usher's past threatens to undermine the very fabric of reality.

"Dead Bad Things is a fierce and primal supernatural novel. Brutalist horror writer Gary McMahon has succeeded not only in gestating further the furtive world he seeded in its prequel, Pretty Little Dead Things, but has also excelled in exuding a sense of menace and threat rarely seen in paranormal fiction." -Spooky Reads

"Gary McMahon has perfected the art of urban horror. He populates his books with a catalogue of grotesque, depraved characters all who are much too real for comfort." -The Black Abyss

"I’m a fan of [McMahon's] writing, as you never know what you’re going to get, except for one thing: there is always going to be some sort of curved ball thrown at you." -Falcata Times


Praise for "Pretty Little Dead Things" - the first in the series:

"It's by far the best horror novel release of 2010 and what's even better is that it's only the first novel in the series."
- Dark Fiction Review

"One of the BEST of 2010... McMahon's atmopshere is fantastic, thanks to his partially-poetic (and well-timed) prose... PRETTY LITTLE DEAD THINGS is one of those novels that you don't want to end."
- Horror Fiction Review

"You will be seeing a lot more of Gary McMahon over the next few years... The scenes in the otherworld are horrifically bleak and will stay with you for a long time... genre fans should rejoice that Gary McMahon has not sold out or dumbed down. His writing remains powerful, bleak, shocking... oh and brilliant. Rating 4/5"
- The Black Abyss

Gary McMahon's short fiction has appeared in numerous acclaimed magazines and anthologies in the UK and US and has been reprinted in yearly "Best of" collections.

He is the multiple-award-nominated author of the novellas Rough Cut and All Your Gods Are Dead, the collections Dirty Prayers and How to Make Monsters and Pieces of Midnight, and the novels Rain Dogs and Hungry Hearts.
He has been nominated for seven different British Fantasy Awards as both author and editor. The author lives in Leeds, UK.
Loading...
or
Not Currently Available for Direct Purchase