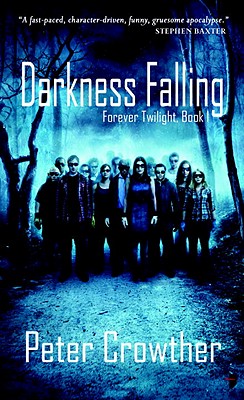 First, the flash. A glare of light, just before dawn, followed by utter darkness. A vast blanketing nothingness that covered the whole Earth.

Then, the disappearances. Friends and strangers alike, swallowed by the darkness… and then returned, altered, changed.

For the people of Jesman's Bend, it feels like the end of the world. But this is only the very start.

"To be read and shared and loved." - Joe Hill

"[The novel] very intelligently and deftly invokes a host of cinematic spookshows from Invasion of the Body Snatchers onwards." - Asimov's

"A riveting read." - The Guardian (on Forever Twilight: Darkness, Darkness)

Peter Crowther is the recipient of numerous awards for his writing, his editing and, as publisher, for the hugely successful PS imprint. As well as being widely translated, his short stories have been adapted for TV on both sides of the Atlantic and collected in The Longest Single Note, Lonesome Roads, Songs of Leaving, Cold Comforts, The Spaces Between the Lines, The Land at the End of the Working Day and the upcoming Things I Didn't Know My Father Knew. He is the co-author (with James Lovegrove) of Escardy Gap and author of the Forever Twilight SF/horror cycle. He lives and works with his wife and business partner, Nicky on the Yorkshire coast.