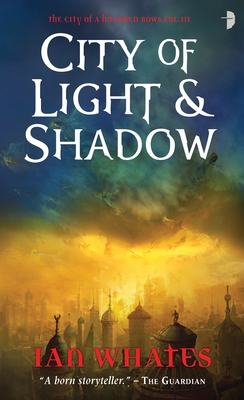 City of Light and Shadow

City of a Hundred Rows, Book 3

The monstrous Rust Warriors are back!

In a land struggling to cope with the onset of the fatal bone flu, street-nick Tom and Kat - the leader of the Tattooed Men - must find a way to despatch both threats. Meanwhile, the Soul Thief is still at large, and still killing...

Praise For City of Light and Shadow: City of a Hundred Rows, Book 3…

Praise for City of Dreams and Nightmare:

"Adventures in a nightmare citadel - a story that hits the ground running and doesn't let up." - Liz Williams

"Born story-teller Ian Whates takes us on a gripping, terrifying trip-of-a-lifetime, through the heights and depths of the exotically grim city of Thaiburley, in this excellent fantasy thriller." - Tanith Lee

"[It] grabs you pretty much from the first page... Highly recommended." - Fantasy Book Critic

"City of Dreams & Nightmare is a brilliantly executed novel, perfectly paced, beautifully described and a true joy to read." - ScienceFictionandFantasy.co.uk

Ian Whates lives in a comfortable home in an idyllic Cambridgeshire village, which he shares with his partner Helen and their pets - Honey the golden cocker spaniel, Calvin the tailless black cat and Inky the goldfish (sadly, Binky died a few years ago).

Ian's love of SF began while he was still at school, manifesting itself when he produced an SF murder mystery as homework after being set the essay title "The Language of Shakespeare", much to the bemusement of his English teacher. His first published stories appeared in the late 1980s, but it was not until the early 2000s that he began to pursue writing with any seriousness.

In 2006 Ian launched independent publisher New-Con Press, quite by accident. That same year he also resumed submitting short stories, selling some 25 to various venues by the time May 2008 arrived, including two to the science journal Nature. Another story, "The Gift of Joy", was shortlisted for the BSFA Awards in 2008.

Ian is currently the chairman of the British Science Fiction Association (BSFA), and edits Matrix, the online news and media reviews magazine. The author lives in Cambridgeshire, UK.
Loading...
or
Not Currently Available for Direct Purchase