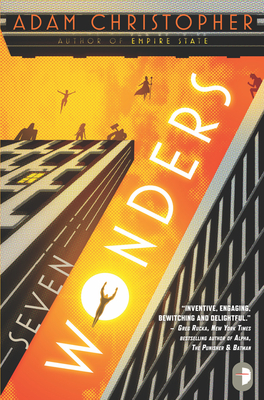 Tony Prosdocimi lives in the bustling Metropolis of San Ventura - a city gripped in fear, a city under siege by the hooded supervillain, The Cowl.

When Tony develops super-powers and acts to take down The Cowl, however, he finds that the local superhero team Seven Wonders aren't as grateful as he assumed they'd be...

"A cool, clever, wickedly twisty superhero story. You can, and will, provide your own pictures..." - Mike Carey, New York Times bestselling writer of The Unwritten and X-Men

"A blast of pure pleasure.  This is Watchmen meets NYPD Blue, while The Incredibles stroll by; fast-moving action infused with Christopher’s infectious love of pulp fiction and the superhero genre."
- Philip Palmer, author of Red Claw, Artemis and Hell Ship

"Superheroes, we’ve always been told, are far above the common man in both powers and nobility, but Adam Christopher unrelentingly tells the story of heroes struggling to guide the world long after they’ve lost their own way. Seven Wonders slams readers in the gut from the very first page and then just keeps on firing cannons, giving readers the same choice as every single citizen of San Ventura… either duck and cover, or ride along with the laser."
- Paul Tobin, author of Prepare to Die!, Spider-Girl and Marvel Adventures: Spider-Man

Adam Christopher was born in Auckland, New Zealand, and grew up watching Pertwee-era Doctor Who and listening to The Beatles, which isn't a bad start for a child of the 80s. In 2006, Adam moved to the sunny North West of England, where he now lives in domestic bliss with his wife and cat in a house next to a canal, although he has yet to take up any fishing-related activities.
Loading...
or
Not Currently Available for Direct Purchase