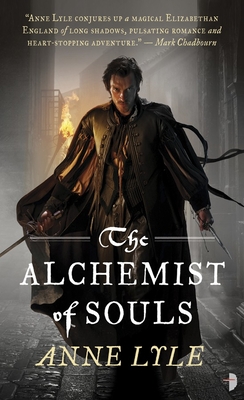 The Alchemist of Souls

When Tudor explorers returned from the New World, they brought back a name out of half-forgotten Viking legend: skraylings. Red-sailed ships followed in the explorers’ wake, bringing Native American goods--and a skrayling ambassador--to London. But what do these seemingly magical beings really want in Elizabeth I’s capital?

Mal Catlyn, a down-at-heel swordsman, is seconded to the ambassador's bodyguard, but assassination attempts are the least of his problems. What he learns about the skraylings and their unholy powers could cost England her new ally--and Mal his soul.

Praise For The Alchemist of Souls: Night's Masque, Volume 1…

Nominee for the Sydney J. Bounds Award for Best Newcomer

"In her debut, The Alchemist of Souls, Anne Lyle creates an alternate Elizabethan England done right. A world where history meets fantasy in the streets, and where neither emerges unscathed. With a twisting plot, endearing characters, fast-paced action, and truly unique and alien "fey", Lyle steps up and gives notice to the genre. No wilting faerie queens and tortured knights here: this is how historical fantasy gets dirty. A great first installment in a promising new series." - Douglas Hulick, acclaimed author of Among Thieves

"Anne Lyle's Alchemist of Souls teems with intrigue and magic worthy of the Bard himself, all set against the backdrop of Elizabethan London. The attention to historical detail brings the time and place alive and peoples it with characters I could instantly empathize with. An outstanding debut!" - Lynn Flewelling

“In her terrific debut novel, Anne Lyle conjures up a magical Elizabethan England of seedy glamour, long shadows, pulsating romance and heart-stopping adventure. The Alchemist of Souls is the calling card of a great new talent in the fantasy field.” - Mark Chadbourn

“Anne Lyle’s fluid writing brilliantly evokes the heady and gritty atmosphere of her alternate Shakespearean London – from the day-to-day life of theatre troupes to the pomp of official ceremonies.” - Aliette de Bodard

Anne Lyle is a website developer and debut author from Nottinghamshire, England. She has an active website, attends UK conventions and is a dedicated Twitter user. The author lives in Cambridge, UK.
Loading...
or
Not Currently Available for Direct Purchase