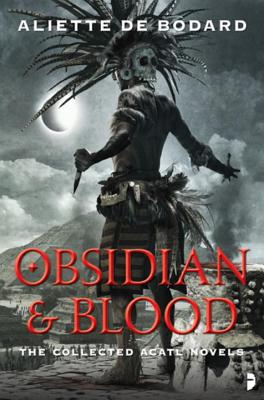 A massive fantasy omnibus containing all three novels in the Obsidian and Blood series:
SERVANT OF THE UNDERWORLD
Year One-Knife, Tenochtitlan - the capital of the Aztecs. The end of the world is kept at bay only by the magic of human sacrifice. A priestess disappears from an empty room drenched in blood. Acatl, high priest, must find her, or break the boundaries between the worlds of the living and the dead.
HARBINGER OF THE STORM
The year is Two House and the Mexica Empire teeters on the brink of destruction, lying vulnerable to the flesh-eating star-demons - and to the return of their creator, a malevolent goddess only held in check by the Protector God's power. The council is convening to choose a new emperor, but when a councilman is found dead, only Acatl, High Priest of the Dead, can solve the mystery.
MASTER OF THE HOUSE OF DARTS
The year is Three Rabbit, and the storm is coming...
The coronation war for the new Emperor has just ended in a failure, the armies retreating with a mere forty prisoners of war - not near enough sacrifices to ensure the favor of the gods. When one of those prisoners of war dies of a magical illness, ACATL, High Priest for the Dead, is summoned to investigate.
"File Under" Fantasy Magical Murder - Aztec Mystery - Human Sacrifice - The Gods Walk ]