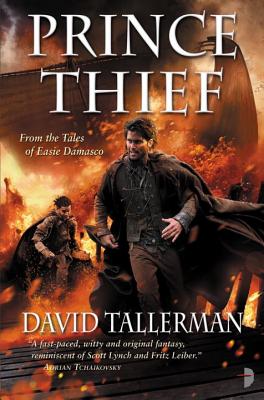 From the Tales of Easie Damasco

Altapasaeda, capital of the Castoval, is about to be besieged by its own king - and where else would luckless, somewhat reformed thief Easie Damasco be but trapped within the city's walls?  Faced with a war they can't win and a populace too busy fighting amongst itself to even try, the Castovalian defenders are left with one desperate option.  Far in the northern lands of Shoan, rebels have set up the young prince Malekrin as a figurehead in their own quest to throw off the king's tyrannical rule.  One way or another, the prince must be persuaded to join forces.

Once again, all hope lies with Damasco and his sticky-fingered approach to problem solving, along with his long suffering partner, the gentle giant Saltlick.  But this time it's a human being that needs stealing, with his own desires and opinions, and events only grow more complicated as Damasco realises that he and the rebellious young prince have more in common that either would admit.

David Tallerman's fantasy, science fiction and horror short stories have appeared in numerous markets, including Lightspeed, Bull Spec, Redstone Science Fiction and John Joseph Adams's zombie best-of The Living Dead. Amongst other projects, David has published poetry, comic scripts, and an award winning short film. He can be found online at http://davidtallerman.net/ and http://davidtallerman.blogspot.com/. The author lives in Yorkshire, England.
Loading...
or
Not Currently Available for Direct Purchase